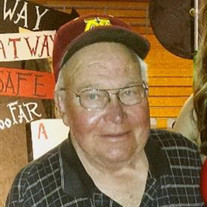 Due to Gethsemane Lutheran Church in Dassel closing due to the Covid-19 Virus. The Funeral service for Gerald W. Peikert will be canceled. Gerald William Peikert, age 80, of South Haven, died Sunday, March 8, 2020, at the St. Cloud Hospital. A private family service will be held. There will be no visitation Friday evening at the Johnson Funeral Home in Dassel. In lieu of flowers. please remember Jerry by contributing to the local food shelf or the Dassel Cokato School District, where he taught and coached. Gerald William Peikert, the son of William and Lorraine (Hillstrom) Peikert, was born on October 31, 1939, in Greenfield, Minnesota. Gerald was baptized and confirmed in the Christian faith and was a member of Gethsemane Lutheran Church in Dassel at the time of his death. Gerald grew up in the Greenfield area where he graduated from the Rockford High School. He continued his education by attending the University of Minnesota, where he received a Bachelor of Arts in Mathematics. On October 8, 1966, Gerald was united in marriage to Joyce Nelson in Hopkins, Minnesota. Together they made their home in Dassel until 1976, when they moved to a farm in rural South Haven. Together they have raised their three children and spoiled their grandchildren and great grandchildren. Gerald accepted a position as a math teacher and coach at the Dassel High School in 1966. When Dassel and Cokato school districts consolidated, he continued to teach Math. He loved his students and enjoyed seeing them reach true understanding of mathematical concepts. Jerry retired from teaching after 42 years in the classroom. He continued to support the school district by attending Charger athletic events. Jerry loved to spend time with his children, grandchildren and great grandchildren. He always enjoyed spending time fishing whether in a boat or a fish house. He truly loved spending time outside in the fields and garden amongst the dirt and plants. He would spend many hours in the garden either weeding, pruning or just enjoying the nature around him. He could often be found during the summer just sitting in his garden or by the raspberry patch. He also enjoyed passing on his knowledge of growing up tapping maple trees to make maple syrup. This was an activity the whole family came to enjoy with him. He always looked forward to having breakfast with either friends or family during the week. He loved to read the local and state newspapers such as the Minneapolis Star and Tribune and Enterprise Dispatch and complete the Sudoku puzzles to keep his mind fresh. Jerry was an avid coach, having coached football, baseball and wrestling. He was a devoted supporter of the Minnesota Gophers and Minnesota Vikings. Jerry is survived by his daughters, Kristine (Richard) Peikert Elliott of Waite Park, Pam Peikert of Annandale, and Amy Peikert Nordstrom of South Haven, four grandchildren, Cecilia (Jaibyne Braatz) Nordstrom, Tarren (Bethany Grangroth) Nordstrom , Abigail Nordstrom, and Jordan Nordstrom , three great grandchildren, Haylin Nordstrom and Mavis Braatz and Cormick Braatz, He is also survived by several nieces, nephews and other relatives. Jerry was preceded in death by his wife, Joyce, parents, William and Lorraine Peikert, three grandchildren, twin infant babies, Breanne and Kyle and an infant baby girl, Paige, son-in-law, James Nordstrom and his brother, Dennis Peikert.

Due to Gethsemane Lutheran Church in Dassel closing due to the Covid-19 Virus. The Funeral service for Gerald W. Peikert will be canceled. Gerald William Peikert, age 80, of South Haven, died Sunday, March 8, 2020, at the St. Cloud Hospital.... View Obituary & Service Information

The family of Gerald William Peikert created this Life Tributes page to make it easy to share your memories.

Due to Gethsemane Lutheran Church in Dassel closing due to the...

Send flowers to the Peikert family.