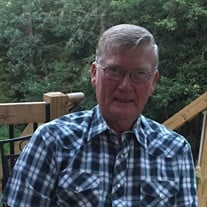 Gerald “Jerry” Herbert Schaefer, age 77, of Dassel, died Saturday, October 26, 2019, at his residence. A Mass of Christian Burial will be held on Saturday, November 2, 2019, at 11:00 a.m. at St. John’s Catholic Church in Darwin with Father Brian Mandel officiating. The interment will be held at the St. John’s Catholic Church Cemetery following the service. There will be a visitation on Friday, November 1, 2019, from 4:00 p.m. to 7:00 p.m. at the Johnson Funeral Home in Dassel with a one-hour visitation prior to the service at the St. John’s Catholic Church in Darwin on Saturday. There will be a Knights of Columbus Rosary at 4:00 p.m. and Parish Prayers will be held at 7:00 p.m. on Friday evening at the Johnson Funeral Home in Dassel. Gerald “Jerry” Herbert Schaefer, the son of Herbert and Irene (Dingman) Schaefer, was born on August 15, 1942, in St. Cloud, Minnesota. He grew up in Belgrade area until the family moved to Sauk Centre. Jerry was united in marriage to Elaine Welle on June 15, 1965, at St. Peter and Paul Catholic Church in Richmond, Minnesota. Together they made their home in the Clearwater area before moving to Dassel. They purchased a farm where he milked 70 head of milking cows and raised hogs. Jerry was a hard worker. He loved the land and enjoyed farming. In 1995, Jerry was employed as head custodian at the Dassel-Cokato High School and later was employed by the district as a groundskeeper. Upon retiring from the school district in 2013, Jerry also spent time mowing lawn at the Education Center in rural Cokato and at the St. John’s Catholic Church grounds in Darwin. Whenever the church needed a hand or a project done, Jerry was willing to help. His faith and family were a meaningful part of his life. He enjoyed spending time with his family at the cabin and camping. He loved to go fishing and deer hunting with his son and sons-in-law. He enjoyed Sunday drives around the countryside looking at the crops and the fall leaves. He could fix anything and had a talent for decorative iron work. His wife, children, grandchildren and great grandchildren were the light of his life. He was a kind, compassionate, caring man who loved his family and friends with all his might and will be missed deeply. He is survived by his wife, Elaine Schaefer of Dassel, Karen (Todd) Athmann of Becker, Marilyn (Tony) Kremer of Avon, Doug (Felicia) Schaefer of Prior Lake, six grandchildren, Jessica Schaefer, Katelyn Athmann, Kalley Athmann, Logan Kremer, Luke Kremer, Haley Schaefer, two great grandchildren, Lilli Alberson and Marlee Alberson, siblings, Joan Tamm of St. Cloud, Dan (Ginny) Schaefer of Pierz, Jane Miller of Eagan, Mary Schaefer of Massachusetts, Fred (Janel) Schaefer of Annandale, Shirley (Jon) Schmit of St. Cloud, Jolene (Eleanor) Schaefer of St. Cloud, and a brother-in-law, Ervin VanBeck of Apple Valley. He was preceded in death by his parents, sister, Carol Borgerding and her husband, Roger Borgerding, sister, Loraine VanBeck and a brother-in-law, Gene Tamm.

The family of Gerald "Jerry" Herbert Schaefer created this Life Tributes page to make it easy to share your memories.

Send flowers to the Schaefer family.