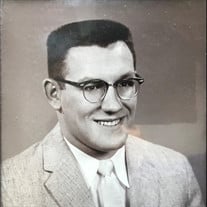 Gerald Frederick Hesser, age 83, of Dassel, died Friday, January 25, 2019, at the Augustana Lakeside Health Care Center in Dassel. A memorial service will be held on Saturday, February 9, 2019, at 10:30 a.m. at the Gethsemane Lutheran Church in Dassel with the Rev. Laurie O’Shea officiating. The interment will be held on a later date at the Steelesville Cemetery in rural Dassel. There will be a time to gather with the family on Saturday, February 9, 2019, one hour prior to the service at the Gethsemane Lutheran Church in Dassel. The Johnson Funeral Home in Dassel is in charge of the memorial service arrangements. Gerald Frederick Hesser, the son of Horace and Etta (Dolder) Hesser, was born on July 30, 1935, in Humbolt, Iowa. As an infant the family moved to a farm near Cosmos, Minnesota. Gerald was baptized in Humbolt, Iowa and confirmed in Cosmos, Minnesota. Gerald graduated from high school in 1953 and then attended Gustavus Adolphus College in St. Peter, graduating in 1958. On August 14, 1960, Gerald was united in marriage to Dana Knobel at the First Lutheran Church in White Bear Lake, Minnesota. Together they made their home in the Chicago, Illinois area where Jerry was taking some classes to obtain his master’s degree. Jerry and Dana moved to Sheboygan, Wisconsin, where they resided until 1967, when they moved to Davenport, Iowa. In 1972, Jerry and Dana moved to Prior Lake, Minnesota, residing there until 1993, when they moved to a cabin on the shores of Collinwood Lake near Cokato, Minnesota. For the last few years, they have resided in Dassel. Jerry was employed working with youth for the YMCA. He changed his profession and became the Director of Development at Gustavus Adolphus College and later was Director of Development for Lutheran Social Services, until his retirement in 1995. Jerry enjoyed spending time with his family for holidays and special events. His grandchildren and great grandchild held a special place in his heart. He could often be found on Collinwood lake in his boat fishing or just cruising around the lake with Dana. He was fond of travel, visiting numerous places around the country and having taken a cruise to Alaska. They would spend winters in Mexico and later in Lake Havasu, Arizona. Jerry was a published author having written “Las Cucarachas’ Tails: a storyteller’s travel escapades… along the ways of Mexico”. He is survived by his wife, Dana Hesser of Dassel, three sons, Gregory (Edith) Hesser of Burnsville, Mark (Vanessa) Hesser of St. Michael, Brian (Kim) Hesser of Hutchinson, eight grandchildren, Christian Hesser, Stephanie Hesser, Charles Veillon, Kennith Veillon, Joshua Hesser, Kora Hesser, Mitchel Hesser and Collin Hesser and one great grandchild, Alexandrea Veillon. He is preceded in death by his son, Steven Hesser, parents, and a brother, Harold Hesser.

The family of Gerald Frederick Hesser created this Life Tributes page to make it easy to share your memories.

Send flowers to the Hesser family.