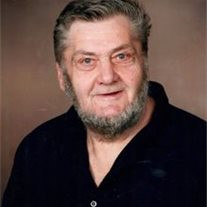 Gary Allen Rusch, age 68, died Monday, March 27, 2017, at the St. Cloud Hospital. A funeral service will be held on Monday, April 3, 2017, at 1:30 p.m. at St. Paul's Evangelical Lutheran Church in Litchfield with the Rev. Jay Panning officiating. The interment will be held at the All Saint's Lutheran Cemetery in Darwin following the service. There will be a visitation one hour prior to the service on Monday at St. Paul's Lutheran Church in Litchfield. The Johnson Funeral Home in Dassel is in charge of the funeral arrangements. Gary Allen Rusch, the son of Ludwig and Frieda (Schlueter) Rusch, was born on August 22, 1948, in Hutchinson, Minnesota. The family made their home in the Hutchinson area and Gary was baptized at Peace Lutheran Church in Hutchinson. In the spring of 1950, Gary's folks purchased a farm in Darwin Township. He attended grade school at District #15 and graduated from the Litchfield High School in 1966. After graduating from high school, Gary attended two years at Willmar Jr. College. Gary was confirmed at St. Paul's Evangelical Lutheran Church where he was a member all his life. He had been a youth member of the Busy Bees 4-H Club and had been active in FFA, where he was on the general livestock, agronomy and soil judging teams. He enjoyed trapping, hunting and fishing. He was a past member of the Minnesota Trappers Association and a charter member of the Central Minnesota Fur Takers of America, where he held the office of President and Treasurer. During the late 60's and early 70's he spent time testifying against leg hold traps and often anti-trapping bills at the Minnesota State Capital. He was a life time member of the Darwin Rod & Gun Club, where he served as Director for over 20 some years and took charge of the kitchen for many smelt and steak fries. He always said he did just about any job except he never detasseled corn. He started his own wholesale bait business in 1971, which he quit after his father died in 1995. It got to be too much with the 50 head of dairy cattle and his own 100 head of beef cows. The bait business was first to go in 1998. In 2002, he sold the last of the beef cows and in 2003, he finally sold the dairy herd. He enjoyed cooking and his mother and himself did a lot of catering, examples, the 3-M Christmas Crew Parties, graduation parties, and wedding receptions. Around the U.S. Bicentennial he got into roasting whole hogs or green hams for private parties. He at one time, pit barbequed an angus beef steer for a Meeker County Republican Party fund raiser. He is survived by his son, Matthew (Sarah) Michels of Shoreview, two granddaughters, Gillian Michels and Phoebe Michels, nieces, Scarlet Rusch and Lorien Rusch, nephew, Austin Rusch, many cousins, aunts, uncles and many lifelong friends, hunting and fishing buddies and people he worked with and worked for him. He was preceded in death by his parents, Ludwig and Frieda, a brother, Lorence and a sister, Debra Rusch.

The family of Gary Allen Rusch created this Life Tributes page to make it easy to share your memories.

Send flowers to the Rusch family.