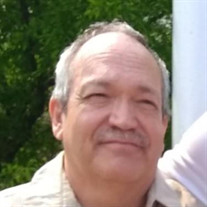 Gary Jay Krick, age 57, of Dassel, died Monday, April 20, 2020, at the Hutchinson Hospital. A private interment will be held at the St. Patrick's Catholic Cemetery in Sauk Rapids on a later date. Gary Jay Krick, the son of Donald and Margie (Weiman) Krick, was born on September 13, 1962, in Saint Cloud, Minnesota. Gary was baptized in the Catholic Faith at the Church of St. Anthony of Padua in Saint Cloud and was confirmed at the St. Patrick's Catholic Church in Sauk Rapids. He grew up in Sauk Rapids, Minnesota where he attended the Sacred Heart Elementary School and graduated from St. Cloud Cathedral High School in 1982. He attended the Saint Cloud Vocational School and later attended Ridgewater College for CAD design. Gary was united in marriage to Janel Bonzelet July 29, 1989. Together they made their home in Dassel. To this union were born two sons, Kaelan and Collin. Gary was employed at Innocast in Howard Lake, Custom Products in Litchfield and for the past several years had been employed at Manufacturing Network Inc. in Kingston. He enjoyed spending time with his family for family holidays and special events. He supported his sons school activities and sporting events. He loved to record their accomplishments by taking photos and video. He was an avid woodworker, loved to tinker on cars, guns, computers, could often be found enjoying a good book, and was a history buff, especially about the wild west and World War II. He was fascinated about tanks. Gary loved his boxer dogs and even named his last boxer, Sherman. He is survived by his wife Janel Krick of Dassel, two sons, Kaelan Krick of Dassel and Collin Krick of Dassel, sisters, Donna (Dale) Nemeth of Grand Rapids, Minnesota, and Karen Krick of Sauk Rapids. He is also survived by nieces, nephews, and other relatives. He was preceded in death by his parents, Donald and Margie Krick and a brother, Brian Krick.

Gary Jay Krick, age 57, of Dassel, died Monday, April 20, 2020, at the Hutchinson Hospital. A private interment will be held at the St. Patrick's Catholic Cemetery in Sauk Rapids on a later date. Gary Jay Krick, the son of... View Obituary & Service Information

The family of Gary Jay Krick created this Life Tributes page to make it easy to share your memories.

Send flowers to the Krick family.