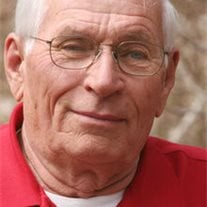 Fredrick Charles Stark, age 83, of Dassel, formerly of Gibbon, died Sunday, July 27, 2014, at the Augustana Lakeside Health Care Center of Dassel. A funeral service will be held on Wednesday, July 30th, 2014, at 11:00 a.m. at the Gethsemane Lutheran Church in Dassel with the Rev. Steven Olson officiating. The interment of the urn will be held at the Augustana Lutheran Cemetery in Gibbon following the service. A time to gather with the family will be held one hour prior to the service at the Gethsemane Lutheran Church in Dassel. The Johnson Funeral Home in Dassel is in charge of the funeral arrangements. Fredrick Charles Stark, the son of Fred and Rose (Kellogg) Stark, was born on November 1, 1930, in New Ulm, Minnesota. He grew up in Gibbon, where he graduated from the Gibbon High School in 1948. After graduating from high school he attended Gustavus Adolphus College for a year. Fredrick was baptized and confirmed in the Lutheran faith and had been a member of the Augustana Lutheran Church in Gibbon for many years before becoming a member of the Gethsemane Lutheran Church in Dassel. On September 11, 1954, Fredrick was united in marriage to Beverly Olson in Gibbon. Together they made their home in Gibbon, where they raised their three daughters. Fredrick and Beverly celebrated 41 year of Marriage. He owned and operated his own semi-truck and independently drove for McKesson Chemical out of Litchfield, and JR Schugel Trucking from New Ulm for several years. He was proud of logging in over four million miles while driving his truck. On August 11, 2001, He was united in marriage to Verna Gruenhagen at the Augustana Lutheran Church in Gibbon. Together they made their home in Dassel for the past thirteen years. He enjoyed spending time fishing, trapping, watching the Minnesota Twins, playing cards, and enjoyed a great conversation with family and friends. Survived by his wife, Verna Gruenhagen-Stark of Dassel, children, Susan (Gary) Bullemer of New London, Michelle "Shelley" (Todd) Anderson of Minnetrista, Sara (Doug) Husfeldt of Buffalo, and six grandchildren, Sam and Grant Bullemer, Allie and Logan Anderson, and Evan and Sydney Husfeldt, one sister, Kathy (Randy) Friedrichs of Owatonna, Verna's children and their families, Bruce Gruenhagen of Coon Rapids, Todd (Linda) Gruenhagen of North Saint Paul, and their children, Sally (John) Stien, and Holly (Mike) Wadino and their children, (Michael and Gia Wadino), Stephan Gruenhagen, Jubie Gruenhagen, and Jayne Gruenhagen. He was preceded in death by his wife, Beverly on July 9, 1995, and his parents, Fred and Rose Stark.

Fredrick Charles Stark, age 83, of Dassel, formerly of Gibbon, died Sunday, July 27, 2014, at the Augustana Lakeside Health Care Center of Dassel. A funeral service will be held on Wednesday, July 30th, 2014, at 11:00 a.m. at the Gethsemane... View Obituary & Service Information

The family of Fredrick Charles Stark created this Life Tributes page to make it easy to share your memories.

Send flowers to the Stark family.