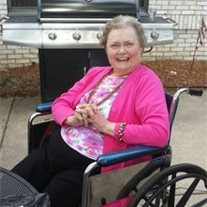 Florence Viola Sikkila, age 85, of Litchfield, formerly of Kingston, died Sunday, December 10, 2017, at Meeker Manor in Litchfield. A funeral service will be held on Wednesday, December 13, 2017, at 11:00 a.m. at the Ostmark Lutheran Church in rural Watkins with the Rev. Joseph Midthun officiating. The interment will be held at the Redeemer Lutheran Cemetery, in Kingston, Minnesota. There will be a visitation one hour prior to the funeral service at the Ostmark Lutheran Church on Wednesday Morning. Florence Viola Sikkila, the daughter of Delbert and Esther (Oberg) Carlson was born on August 23, 1932, in Kingston Township, Meeker County, Minnesota. Florence grew up in the Kingston area and attended country school. She was baptized and later confirmed in the Christian faith and had been a faithful member of Redeemer Lutheran Church in Kingston for numerous years. On September 9, 1950, Florence was united in marriage to Harry Sikkila in Kingston, Minnesota. Together they made their home in Kingston until 1995, when they moved to Litchfield. Following the death of Harry, Florence continued to reside in Litchfield. she had resided at Gloria Day Apartment and then in 2015, moved to the Meeker Manor. Florence was employed by Carlson Marketing and has also been employed by Northland Canning Company for several years. She loved her family and grandchildren with her whole heart. She enjoyed crossword puzzles, find a word puzzles, watching "I Love Lucy" and playing Bingo. She especially enjoyed listening to polka music and spending time in her flower garden. Florence is survived by her children, Donna (Randy) Dawson of Dassel, Dianna (Gene) Ferrel of New Hope and Larry (Colette) Sikkila of Litchfield, nine grandchildren five great grandchildren, and two siblings, Roger (Jeanetta) Carlson of Litchfield and Marilyn (Will) Hess of Superior, Wisconsin. Florence was preceded in death by her husband, Harry and her parents, Delbert and Esther Carlson.

The family of Florence Viola Sikkila created this Life Tributes page to make it easy to share your memories.

Send flowers to the Sikkila family.