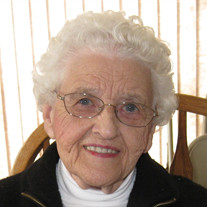 Evelyn Rosalie Lundeen, age 97, of Hutchinson, formerly of Dassel, died Tuesday, January 21, 2020, at the Harmony River Living Center in Hutchinson. A funeral service will be held on Saturday, January 25, 2020, at 11:00 a.m. at Stockholm Lutheran Church in rural Cokato with Rev. Mark Little officiating. The interment will be held at Oakland Cemetery in Hutchinson at a later date. A visitation will be held one hour prior to the service on Saturday at Stockholm Lutheran Church in rural Cokato. The Johnson Funeral Home in Dassel is in charge of the funeral arrangements. Evelyn Rosalie (Heining) Lundeen was born on April 2, 1922 on a farm near Atwater, Minnesota to Charles and Alma (Peterson) Heining. After graduating from Grove City High School in 1940, she worked various jobs in Litchfield. While working at REA, she met the love of her life, Roger (Bunch) Lundeen. They were married on June 25, 1949. They moved to the Lundeen family farm working hard and building their happy life together. She loved to cook and was an excellent baker. She always had the coffee pot on for guests and a fresh baked treat. She was busy with her handiwork and was so proud when she won blue ribbons and a “Champion” at the county fair. After Roger passed away in 2004, Evelyn moved off the farm and resided at Evergreen Apartments in Hutchinson. She was so happy there and she loved spending time with her family-especially her grandchildren and great-grandchildren. When she could no longer live on her own, she moved to Harmony River Living Center in April of 2016 and passed away there on January 21, 2020. Evelyn was preceded in death by her parents, husband Roger, and infant brother. She is survived by her daughter, Linda (Don) Pankake of Hutchinson and grandchildren, Gary (Kelley) Pankake, Michelle (Aaron) Dahlman, Scott Lundeen Jr, Stephanie Lundeen (Robert Sturges)and great-grandchildren, Braxton and Brielle Pankake, Lars, Evelyn and Ivan Dahlman, Kali (Isiah) Sweet, Skyler Lundeen, and Owen and Jack Lundeen. Survivors are also her sister, Ardella Voigt of Litchfield, sister-in-law, Connie Flowers of Georgia, and nieces, Sandra Meyer, Laurie Boll, Janelle Hoekstra, Venita McCormick and nephews, Byron Lundeen, Charles Voigt, and Richard Voigt. Also surviving are her special friends, Robert and Delores Powell of Hutchinson and other family members and friends. The family appreciates all the love shown her and Pastor Little’s visits which she looked forward to and were always comforting to her.

The family of Evelyn Rosalie (Heining) Lundeen created this Life Tributes page to make it easy to share your memories.

Send flowers to the Lundeen family.