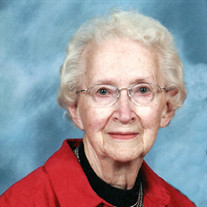 Evelyn Doris Isaacson, age 98, of Dassel, died Sunday, November 3, 2019, at the Augustana Lakeside Health Care Center of Dassel. A memorial service will be held on Sunday, November 10, 2019, at 1:00 p.m. at the Gethsemane Lutheran Church in Dassel with Rev. Laurie O’Shea officiating. There will be a fellowship time with the family on Sunday following the memorial service at the Gethsemane Lutheran Church in Dassel. The Johnson Funeral Home in Dassel is in charge of the memorial arrangements. Evelyn Doris (Klimstra) Isaacson, the daughter of Dewey and Dora (Brynteson) Klimstra, was born on January 26, 1921, in Litchfield, Minnesota. She was baptized at the Presbyterian Church in Litchfield and later confirmed at First Lutheran Church (Gethsemane) in Dassel. Evelyn attended Maynard Lake Country School District #30, before graduating from Dassel High School in 1938. She was a member of Swan Lake Lutheran Church until she was united in marriage to Linton Isaacson on August 16, 1941, in a double wedding with her twin sister, Emelyn. In 1942, when Linton entered military service, Evelyn moved to Missouri and later to Washington to be near Linton. When Linton was sent overseas, Evelyn moved back to Dassel and resided with her parents until Linton’s return from Active Duty in 1946. Upon his return, they made their home in Dassel. Evelyn worked at Tulman’s Clothiers in Dassel, catered events with Lucille Anderson for eleven years, and was employed as the church secretary from 1968 until 1981 at the First Lutheran Church (Gethsemane) in Dassel. Evelyn had been an active member of her church family and was involved as a Sunday School teacher, sang in the church choir, was a member of the sewing and quilters group, and a member of the Gethsemane Lutheran Ladies Aid Circle. She was a member of the Paul F. Dille American Legion Auxiliary. She also helped with bingo at the Dassel Lakeside Nursing Home and was a member of a bowling league. Evelyn loved to cook and host family holidays; her family was very important to her and always sent cards to celebrate birthdays and anniversaries. She enjoyed her grandchildren and great grandchildren and loved the time she spent with them. She enjoyed traveling with Linton and visited many places around the country. She loved to bake, and her Swedish rye bread was always requested at family gatherings. In late summer she spent time canning and freezing fruits and homegrown vegetables from her garden. She is survived by Linton Isaacson, her husband of 78 years, children, Ralph Isaacson of St. Paul, Connie (Marland) Meyer of Litchfield, 9 grandchildren, 14 great-grandchildren, daughters-in-law, Renee Isaacson of Mesa, Arizona; and Bonnie Isaacson of Cokato, and a sister-in-law, Mamie Holm of Willmar. She is also survived by many nieces, nephews and cousins. Evelyn was preceded in death by her parents, Dewey and Dora Klimstra, two sons, Dennis Isaacson in 2014, and Loren Isaacson in 2018, her daughter-in-law Priscilla Isaacson in 2005, and sisters Luella Nass, and her twin sister, Emelyn Isaacson.

Evelyn Doris Isaacson, age 98, of Dassel, died Sunday, November 3, 2019, at the Augustana Lakeside Health Care Center of Dassel. A memorial service will be held on Sunday, November 10, 2019, at 1:00 p.m. at the Gethsemane Lutheran Church in... View Obituary & Service Information

The family of Evelyn Doris Isaacson created this Life Tributes page to make it easy to share your memories.