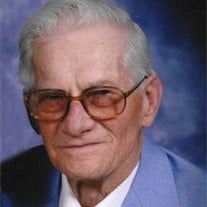 Eugene William Helmer, age 88, of Dassel, died Saturday, February 24, 2018, at the Lakeside Health Care Center of Dassel. A funeral service will be held at 1:00 p.m. on Saturday, March 3, 2018, at Grace Lutheran Church in Hutchinson with the Pastor Greg Tobison officiating at the service. Interment will be held at the Winthrop Cemetery in Winthrop. There will be a one-hour visitation prior to the service on Saturday at Grace Lutheran Church. Eugene William Helmer, the son of Edward and Clara (Hosek) Helmer, was born on October 12, 1929, in Olivia, Minnesota. He grew up in the Olivia area where he attended school and was baptized and later confirmed in the Lutheran faith. On June 6, 1959, Gene was united in marriage to Evelyn Peetsch in McGregor, Minnesota. Together they made their home in Gibbon. In 1965, the couple moved to Dassel. They then joined St. Peter's Lutheran Church of Ellsworth Township where they remained members. Gene enjoyed worshiping and volunteering. Together they celebrated 58 years of marriage. As a young man he briefly worked for the railroad. Gene then began a 53-year career with Duininck Brothers working throughout Minnesota, South Dakota, and Nebraska on road construction projects. For more than 30 years he was the plant operator. He had the ability to meet and make friends wherever he was working. He shared interesting stories about the people and places he had been. In his free time, he enjoyed spending time with his family and friends, hunting, fishing, reading, growing vegetables and going to auctions and flea markets. Gene is survived by his wife, Evelyn Helmer of Dassel, daughter, Lisa (Paul) Woestehoff of Jordan, two grandsons, Paul Woestehoff and Kyle Woestehoff, a sister-in-law, Della Mae Helmer of St. Cloud. He is also survived by many nieces, nephews and other relatives. He was preceded in death by his parents, Edward and Clara Helmer, siblings, June (Don) Decker, Duane (Doris) Helmer, Pat (Berdin) Davis, Harris Lee Helmer, Tom Helmer, Robert (Karen) Helmer, and an infant brother, Delton.

Eugene William Helmer, age 88, of Dassel, died Saturday, February 24, 2018, at the Lakeside Health Care Center of Dassel. A funeral service will be held at 1:00 p.m. on Saturday, March 3, 2018, at Grace Lutheran Church in Hutchinson with the... View Obituary & Service Information

The family of Eugene William Helmer created this Life Tributes page to make it easy to share your memories.

Send flowers to the Helmer family.