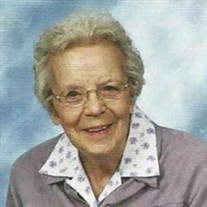 Esther Luella Matheny, age 98, of Dassel, died Sunday, November 8, 2020, at the Augustana Lakeside Health Care Center of Dassel. A private graveside service will be held on Saturday, November 14, 2020, at the Eden Lake Cemetery in Eden Valley, Minnesota with the Rev. Keith Carlson officiating at the graveside service. The Johnson Funeral Home in Dassel is in charge of the graveside services. Esther Luella (Hedin) Matheny, the daughter of Elmer and Lena (Anderson) Hedin was born on August 27, 1922, in Dassel, Minnesota. Esther grew up in the Maynard Lake area where she was baptized and later confirmed at the Evangelical Covenant Church in Dassel and was presently a member there. Esther graduated from the Maynard Lake School District in 1936. In the fall of 1936, Esther started attending the Dassel High School where she graduated in May of 1940. On December 21, 1941 Esther was joined in marriage to Harold Matheny in Las Vegas, Nevada. Together they made their home in California where Harold was working. In 1944, Harold and Esther moved to Minneapolis where Esther was employed at Honeywell for several years. In 1951, when Harold was transferred to California, they resided there until they moved to Lewiston, Idaho where they owned and operated a convenience store for several years. In 1991, after retirement, Harold and Esther moved to Eden Valley, Minnesota where they built a home and enjoyed retirement. After Harold's death, Esther moved to Dassel to be close to family. She enjoyed spending time doing crafts and sewing and made beautiful wall hangings, pillows and Christmas tree skirts among other things and also made many country western shirts for Harold. She enjoyed taking care of her flowers, too. She loved nature and was deeply knowledgeable about birds and had numerous bird feeders at her home and around her apartment. She loved to sing with Harold when he’d bring out his guitar and they would sing country western songs and hymns and others. She would also go with him on occasion when he sang at care centers and other places. We all enjoyed Esther’s humor. She knew just how to kid you! When she lived at Dassel Lakeside Apartments, she was always helping with something and as a result was named “Volunteer of the Year” in 2009. She loved her family deeply and always had a great love and took a special interest in all her many nieces and nephews and great nieces and nephews. She is survived by her many loving and special nieces and nephews and other relatives and friends. She was preceded in death by her husband, Harold, her parents, Elmer and Lena Hedin, and her three brothers, Gust Hedin, Albert Hedin and Louie Hedin.

The family of Esther Luella Matheny created this Life Tributes page to make it easy to share your memories.

Send flowers to the Matheny family.