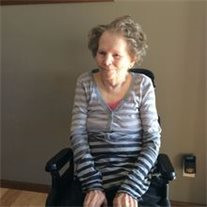 Erma Lucille Marking, age 91, of Litchfield, formerly of Dassel, died Wednesday, April 22, 2015, at the Lakeview Ranch in Dassel. A Mass of Christian Burial will be held on Monday, April 27, 2015, at 11:00 a.m. at St. John's Catholic Church in Darwin with Fr. Brian Mandel officiating. Interment will be held at Swan Lake Cemetery in rural Dassel following the service. A visitation will be held on Sunday evening from 4:00 p.m. to 7:00 p.m. at the Johnson Funeral Home in Dassel. A parish prayer service will be held at 6:30 p.m. on Sunday evening at the Johnson Funeral Home in Dassel. There will be a one hour visitation prior to the service at St. John's Catholic Church in Darwin on Monday morning. Erma Lucille (Mortenson) Marking, the daughter of Henry and Jennie (Olson) Mortenson, was born on January 18, 1924, in Litchfield, Minnesota. She grew up in Litchfield and was baptized in the Episcopal faith and was later confirmed in the Catholic faith as an adult. Erma graduated from Litchfield High School in 1942. On June 8, 1948, Erma was united in marriage to Philip Marking at St. Philips Catholic Church Rectory in Litchfield. Together they made their home on a farm in rural Dassel where they raised their two children. Erma had been employed for 16 years at 3M in Hutchinson. She also raised chickens on the farm and sold their eggs to friends and neighbors. She loved to spend time with her family and took loving care of her grandchildren. She enjoyed sewing, embroidery, crocheting, and baking chocolate chip cookies for her grandchildren. She spent many hours in her strawberry garden during the summer. She will be missed by her family and her many friends. Erma is survived by her children, Ernie (Darlene) Marking of Dassel, Ann (Ricky) Zillmer of Litchfield, four grandchildren, Jessica (Darren) Randt, Jacquelynn (Rusty) Valiant, Phillip (Kayla) Marking Zillmer and Joanna (James) Zillmer, nine great grandchildren, Natalie, Jocelynn, Kaden, Natasha, Zachary, Nora, Peyton, Spencer, and Tyler, and one brother, Vern (Wanda) Mortenson of Litchfield. Erma was preceded in death by her husband, Philip on December 28, 2010 and her parents, Henry and Jennie Mortenson.

The family of Erma lucille Marking created this Life Tributes page to make it easy to share your memories.

Send flowers to the Marking family.