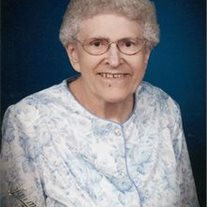 Elsie Pearl Riebe, age 82, of Dassel, formerly of Darwin, died Saturday, August 30, 2014, at the Augustana Lakeside Health Care Center of Dassel. A funeral service will be held on Saturday, September 6, 2014, at 1:00 p.m. at the Evangelical Covenant Church in Dassel with the Rev. Keith Carlson officiating. The interment will be held at the Lake Ripley Cemetery in Litchfield. A visitation will be held on Friday evening from 5:00 p.m. to 8:00 p.m. and one hour prior to the service on Saturday at the Evangelical Covenant Church in Dassel. The Johnson Funeral Home in Dassel is in charge of the funeral arrangements. Elsie Pearl "Sandberg" Riebe, the daughter of Arthur and Lilla (Colburn) Sandberg, was born on March 21, 1932, in Darwin, Minnesota. Elsie grew up in Darwin and attended District 42, for her education. Elsie was baptized and confirmed in the Christian faith. On June 5, 1948, Elsie was united in marriage to Gilbert Riebe at the Ellsworth Lutheran Church in rural Darwin, Minnesota. Together they made their home in Darwin. Upon Gilbert's death, Elsie moved to Gloria Dei in Litchfield before moving to Dassel. Elsie had been employed by National Connector's and later Fabri-tec in Cokato where she retired. She loved to spend time in her garden, collecting and reading recipes, baking, cooking, taking pictures, listening to Christian radio and television, listening to Norma Burke, embroidery, playing games with nephews, babysitting nieces and nephews, spending time with extended family and even enjoyed yodeling. She especially enjoyed her grandchildren and great grandchildren; each and every one was special to her. Elsie is survived by her children, Irene (Jim) Stewart of Dassel, and Eugene (Sheila) Riebe of Circle Pines, four grandchildren, Brent (Kimberly) Stewart, Bonnie Nelsen, Timothy Riebe, and Taylor Riebe, three great grandchildren, Dylan Maidl, Marissa Engquist, and Lacie Nelsen. She is also survived by several nieces, nephews, cousins and friends. She was preceded in death by her husband Gilbert, parents, siblings, Florence Lukanen, George Porth, and Harold "Shorty" Porth.

Elsie Pearl Riebe, age 82, of Dassel, formerly of Darwin, died Saturday, August 30, 2014, at the Augustana Lakeside Health Care Center of Dassel. A funeral service will be held on Saturday, September 6, 2014, at 1:00 p.m. at the Evangelical... View Obituary & Service Information

The family of Elsie Pearl Riebe created this Life Tributes page to make it easy to share your memories.

Send flowers to the Riebe family.