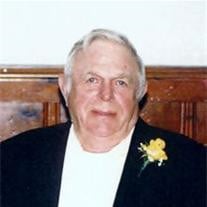 Elmer "Bud" Dallmann, age 91 of Cokato, died Tuesday, May 15, 2012, at the Abbott Northwestern Hospital in Minneapolis. A funeral service will be held on Saturday, May 19, 2012, at 2:00 p.m. at the Johnson Funeral Home in Dassel with the Rev. John Peterson officiating. The interment will be held at the Dassel Community Cemetery following the service. A visitation will be held from 12:00 (Noon) to 2:00 p.m. at the Johnson Funeral home in Dassel. Elmer Warren "Bud" Dallmann, the son of Paul E. and Milda (Hagglund) Dallmann was born on April 2, 1921, in Minneapolis, Minnesota. He grew up on the family farm and attended Collinwood School. Bud was baptized in Minneapolis and was later confirmed at the Stockholm Lutheran Church. On April 30, 1942, Bud was united in marriage to Hazel Nancy Compton in Minneapolis, Minnesota. Together they made their home in the Dassel area. In August of 1942, Bud was inducted into the United States Army. He served his country during World War II in the European Theater of Operation. He served during the Ardennes, Rhineland and Central Europe Campaigns. Upon Bud's return from active service in 1945, he continued to farm and they made their home in Stockholm Township before they moved to Lamson and then Collinwood. Bud and Hazel had celebrated 67 years of marriage. Bud was a hard worker and enjoyed spending time working his land. He enjoyed hunting, fishing, watching birds, nature, and gardening. Together Hazel and Bud took their produce from their garden to sell at the farmer markets in Litchfield and Hutchinson. He was a talented carpenter and woodworker. He could often be found carving ducks, making baby doll cradles, and doll furniture. He loved his family and took great pride in his children, grandchildren, and great grandchildren's accomplishments. Bud is survived by his children, Bob and Joan Dallmann of Darwin, Nancy and Ralph Diers of Howard Lake, and Penny and Dick Mills of Victoria, 9 grandchildren, Mark (Kelli) Dallmann, Mike (Laura) Mills, Matt (Sarah Peach) Mills, Greg (Jordan) Mills, Tom (Micki) Diers, Pam (Gene) Christensen, Heidi (Jonathan) Haapala, Amy (Robert) Nelson, and Ann (Sean) Dietel, 18 great grandchildren and one sister, Betty Wanous of Silver Lake. He was preceded in death by his wife, Hazel, infant son, David, parents, sister, Jane Hardy, brothers, Ray Dallmann and George Dallmann.

Elmer "Bud" Dallmann, age 91 of Cokato, died Tuesday, May 15, 2012, at the Abbott Northwestern Hospital in Minneapolis. A funeral service will be held on Saturday, May 19, 2012, at 2:00 p.m. at the Johnson Funeral Home in Dassel with the Rev.... View Obituary & Service Information

The family of Elmer Dallmann created this Life Tributes page to make it easy to share your memories.

Send flowers to the Dallmann family.