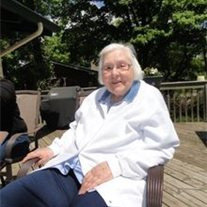 Elaine M. Moore, age 90, of Dassel, died Thursday, July 10, 2014, at the Augustana Lakeside of Dassel. A memorial service will be held on Sunday evening at 6:00 p.m. at the Evangelical Covenant Church in Dassel. The Rev. Keith Carlson will be officiating with the interment at Fort Snelling National Cemetery on Wednesday, July 16, 2014, at 1:00 p.m. A time to gather with family will be held one hour prior to the service at the evangelical Covenant Church in Dassel. Elaine Mavis Moore was born on June 2, 1924, on the family farm in East Lake Lillian Township, Kandiyohi County, to Christ and Hattie (Hanson) Trygestad. She was baptized at home by Rev. H.K. Madsen and was confirmed in the Lake Lillian United Methodist Church. She attended rural school and graduated from Atwater High School in 1941. In July 1944, she enlisted in the Women's Army Corps. Had basic training at Fort Des Moines, Iowa, then served at Marianna Army Air Field, Florida and Fort Meade, Maryland. She attended the University of Minnesota, St. Paul campus, majoring in Home Economics and graduated in 1951. She was a member of Gamma Omicron Beta and was elected to the honor society, Phi Upsilon Omicron. She worked as an Extension Home Agent, later returning to the University, majoring in education. She taught Home Economics to both boys and girls for 12 years in the Hector High School. She worked as a food supervisor at Shalom Home in St. Paul and retired in 1988, moved to Dassel and was supervisor at Senior Dining for 5 years. She belonged to Senior Citizen Club and was President for several years. She especially enjoyed cooking, baking, craft work, quilting and reading. Playing games with her friends and great-grandchildren created many hours of enjoyment and memories. She is survived by her three children, Terry (and Sue) Moore of Dassel, Daniel (and Jeanine) of Cold Spring, and Carol Lundquist of Avon; 10 grandchildren, Heidi (and John) Maki of Hutchinson, Krista (and Jeremy) Cates of Darwin, Paula (and Matt) Salmela of New York City, NY, David Moore of Fargo, ND, Robert Moore of St. Paul, Bradley Moore of Fountain Valley, CA, Joseph Sikkila of Cold Spring, Emily Moore of Cold Spring, Kathryn Lundquist of Long Prairie, Lauren Lundquist of Cold Spring; 6 great-grandchildren, Austin Larson of Litchfield, Zachary, Riley, Braeden and Marlee Cates of Darwin and Cameron Kusek of Long Prairie; sister, Gertrude Hood of Wilmington, DE, and sister-in-law, Frances Trygestad of St. Louis Park. Elaine was preceded in death by her parents, sister Jeanette (and Vernon) Huebsch, brother, Harvey Trygestad of St. Louis Park and grandchild, David Sikkila.

Elaine M. Moore, age 90, of Dassel, died Thursday, July 10, 2014, at the Augustana Lakeside of Dassel. A memorial service will be held on Sunday evening at 6:00 p.m. at the Evangelical Covenant Church in Dassel. The Rev. Keith Carlson will be... View Obituary & Service Information

The family of Elaine M Moore created this Life Tributes page to make it easy to share your memories.

Send flowers to the Moore family.