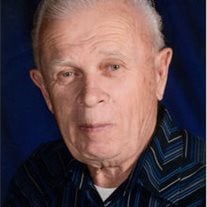 Edward Albert Rettman Jr., age 80, of Hutchinson, died Tuesday, September 12, 2017, at the Harmony River Living Center in Hutchinson. A funeral service will be held at 11:00 a.m. on Friday, September 15, 2017, at Our Savior's Lutheran Church in Hutchinson with Pastor Kevin W. Oster officiating. The interment will be held at Oakland Cemetery in Hutchinson following the service. There will be a visitation from 5:00 p.m. to 7:00 p.m. on Thursday evening and one hour prior to the service on Friday at Our Savior's Lutheran Church in Hutchinson. The Johnson Funeral Home in Dassel is in charge of the funeral arrangements. Edward Albert Rettman Jr. passed away Tuesday, September 12, 2017, at the Harmony River Living Center after a valiant fight with melanoma. He was born on May 17, 1937, in New Ulm, MN to Edward and Opal (Ondrachek) Rettman and baptized on June 13, 1937, by Rev. C. H. Kowalski at St. Paul's Lutheran Church in Stewart, MN. The family moved to a small farm on the south shore of Lake Stella in 1938. He attended Country School in Ellsworth Township and graduated from Litchfield High School in 1955. Ed enlisted in the Army National Guard in January 1955, where he received heavy equipment training at Fort Leonard Wood, MO, in the fall of 1955. He was Honorably Discharged from the U. S. Army Reserves on January 31, 1963, attaining the rank of Sergeant E5. Following adult instruction, Ed was received into membership at Our Savior's Lutheran Church in Hutchinson on October 20, 1985. On November 30, 1985, he was married to Eldonna (Alsleben) Roepke at Our Savior's Lutheran Church by Rev. Darrel Thalmann. Ed operated his own excavating business for 50 years, recently cleaning drainage ditches for area counties. He loved playing with his "tinker toys". Hobbies included fishing, hunting, playing cards, traveling, old tyme & country music, watching the MN Lynx, MN Vikings, and the Outdoor Channel. Some travel highlights were Branson, London, Canadian Rockies, Arizona-Hoover Dam, Grand Canyon, Mt. Rushmore, Bad Lands, Devils Tower and Alaska. He was thrilled to be able to watch the MN Vikings play at US Bank Stadium and watch the MN Lynx play at Target Center last year. Ed liked to kid around and joke with people or just stop and give them grief. He was feisty and ornery with a marshmallow heart, ready to lend a helping hand. He always seemed to be in a hurry and yet running late. He enjoyed operating heavy equipment, driving trucks & fast cars, visiting with friends at local watering holes and talking on the phone. He was very proud of his grandchildren and their accomplishments. Ed was a member of the American Legion Post 96 of Hutchinson. He is survived by his wife, Eldonna Rettman of Hutchinson, two daughters, Kristine (Brian) Ebent of Waconia, and Kimberly (Keith) Norbie of Chanhassen, four grandchildren, Adam and Alex Ebent and Jake and Reese Norbie. Sister-in-law, Elaine Haus & husband, Don, nieces, nephews, cousins and friends. He was preceded in death by his parents and brother, Donald Rettman, brother-in-law, Jerome Alsleben, and sister-in-law, LaVonne Boller & her husband, Lyle, father-in-law and mother-in-law, Arthur and Eileen Alsleben, and niece, Debra Boller. Thank you to everyone for the cards, visits & prayers. A special thank you to the Harmony River Living Center and Hospice Care Team.

The family of Edward Albert Rettman, Jr. created this Life Tributes page to make it easy to share your memories.

Send flowers to the Rettman, family.