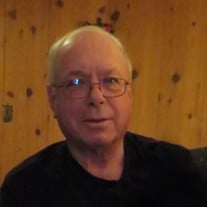 Edward Simon Jepson, age 76, of Darwin, died on December 18, 2019, at his residence. A time to gather with family will be held on Friday, January 3, 2020, from 1:00 p.m. to 3:00 p.m. at the Johnson Funeral Home in Dassel. Edward (Eddie) Simon Jepson, the son of Simon and Agnes (Suppon) Jepson was born on August 23, 1943, in Saint Paul, Minnesota. He grew up in the Dassel area helping on the Idle Wave Resort that the family owned on Lake Washington. Eddie graduated from Dassel High School in 1962, after graduation Eddie attended a vocational technology school where he received training in motor and engine repair. On September 16, 1972, Eddie was united in marriage to Karen Boltz in South Dakota. Together they made their home in the Dassel area where they raised their three children. He was employed for many years at 3-M Manufacturing in Hutchinson. Upon retirement, Eddie opened a small engine repair shop at home for many years. He loved to spend time on Washington Lake ice fishing. Eddie enjoyed traveling with his wife and children. They had traveled to many places in western United States and also to his boat on Lake Michigan. He is survived by his wife, Karen of Darwin, two daughters, Donia Jepson of Watkins, and Shannon Jepson of Litchfield, three grandchildren, Shelby Jepson, Brynn Thies and Tanner Thies. He was preceded in death by his son, Brett Jepson and his parents, Simon and Agnes Jepson.

The family of Edward "Eddie" Simon Jepson created this Life Tributes page to make it easy to share your memories.

Send flowers to the Jepson family.