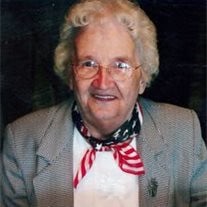 Edith Elizabeth Ailie, age 93, of Dassel, died Wednesday, March 25, 2015, at the Cokato Manor. A funeral service will be held on Monday, March 30, 2015, at 11:00 am at the Good Shepherd Free Lutheran Church in Cokato. The interment will be held at the Cokato Finnish Cemetery following the service. A visitation will be held on Sunday evening March 29, 2015, from 4:00 p.m. to 7:00 p.m. with a time to share at 7:00 p.m. at the Johnson Funeral Home in Dassel. There will be a one hour visitation prior to the service at the church on Monday. Edith Elizabeth Ailie was born on October 24, 1921, in Ramsey, Michigan to Leander and Martha (Lamminen) Jacobson. She was baptized in Ironwood, Michigan. Her father died in 1924 in Ironwood, Michigan and at the age of seven she moved to Dassel with her stepfather, Hans Kalli and her mother. She attended Little Swan School and Dassel High School, graduating in 1939, and Hutchinson Teachers Training class, graduating in 1940. On July 15, 1942, she was married to Clifford Ailie at Great Bend, New York, while he was in the United States Army. They also lived in New Jersey and Atlanta, Georgia before he was sent overseas. After the war, they lived in Sartell before moving to the farm in northeast Dassel. There they lived for twenty-five years and raised their family of six children. In 1971, they moved to Waite Park where they lived for sixteen years during Cliff's employment at the Veterans Administration Hospital in St. Cloud. In 1987, they retired to their home at Big Swan Lake northeast of Dassel. Edith taught a total of six years in Meeker and Wright Counties, and was the last teacher at Knapp School from 1968 to 1971. She was the reporter for the Dassel Dispatch and reported the North East Dassel News. She had worked at Haapala Seed for nine years, was a nursing assistant and volunteer at Waite Park Nursing Home, and was a volunteer at the Dassel Lakeside Nursing Home. But most of all she made a home for all of her family. Edith enjoyed being with her children, grandchildren, great-grandchildren, extended family and friends. Her church family was very important to her. She will be greatly missed at Ailie Camp. She was a member of Grace Apostles Lutheran Church. She was also a member of the Dassel Area Historical Society, Finnish American Historical Society of Cokato, and a charter member for over fifty years of the "Swanview Birthday Club" Edith was preceded in death by her husband, Clifford in 1995, her parents, infant brother, Lloyd Kalli, infant sister, Elaine Kalli, brother, Earl Kalli, step-brother, Elmer Kalli, step-sister, Louella Dandridge, son-in-law, Colin Callister, and a great grandson, Benjamin Olson. She is survived by her children, Sharon Callister of Cannon Falls, Carol (Duane) Sangren of Litchfield, Mark Ailie of Dassel, Janet (Keith) Barberg of Dassel, John (Kathy) Ailie of Eau Claire, Wisconsin, and Scott (Marlys) Ailie of Detroit Lakes, twenty seven grandchildren, 45 great grandchildren and another one on the way, sister-in-law, Bette Kalli of Baxter, Minnesota, many nieces, nephews, special god-daughters, Joan (Tormanen) Lindula, Mary Ann Leukuma (Manthey), and Mary (Isaacson) Hershey, god-son, Tim Haag, special visiting companion, Nancy Piepenburg, and many friends.

Edith Elizabeth Ailie, age 93, of Dassel, died Wednesday, March 25, 2015, at the Cokato Manor. A funeral service will be held on Monday, March 30, 2015, at 11:00 am at the Good Shepherd Free Lutheran Church in Cokato. The interment will be held... View Obituary & Service Information

The family of Edith Elizabeth Ailie created this Life Tributes page to make it easy to share your memories.

Send flowers to the Ailie family.