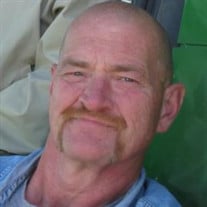 Duane Eldon Danielson, age 65, from Dassel, formerly from Cokato passed away Wednesday, May 20, 2020 at the Augustana Lakeside Health Care Center of Dassel. A interment service will be held at 11:00 a.m. on Saturday, June 6, 2020 at Stockholm Lutheran Cemetery. Duane Eldon Danielson, the son of Eldon and Lois Mae (Nelson) Danielson was born on June 13, 1954, in Hutchinson, McLeod County, Minnesota. Duane grew up in Cokato where he attended school, graduating from Cokato High School in 1972 and later attended Willmar Junior College. Duane spent much of his childhood and adult years farming. He also worked for Wright and Meeker County as a deputy sheriff. Later in his career, he was an over-the-road semi-truck driver, making deliveries from coast to coast. Dewey always looked forward to going to “the farm.” He spent his time milking cows, picking rocks and hoeing in the fields. He was known to have the fastest rate for unloading a rack of hay in just 7 minutes. Each spring, Dewey looked forward to spending time in the tractor while cultivating. The love of farming wasn’t just about helping with the chores, it was about spending time with his family. In addition to farming, Dewey was passionate about sports. Growing up, he loved playing football, softball, broomball and basketball in the hayloft of the family barn. He was an avid hunter and fisherman, passing along his passions to his children. According to Dewey, one of his biggest accomplishments in his life was raising 4 children. He cherished spending time with his family, going out for a “bite to eat”, attending their athletics and events, or by just making a phone call to check in. Dewey is remembered by family and friends for his compassionate heart, quick wit, generosity and selflessness. Dewey was so much, to so many. Duane is survived by his children, Torrey (Erin) Keith of Dassel, Travis (Sarah) Keith of Jacksonville, NC, Dallas (Miranda) Danielson of Richmond, and Cassie (Kyle) Akerson of Belgrade, 13 grandchildren, his siblings Sherman (Yvonne) Danielson of Stillwater, Cheryl (Philip) Ragis of Eagan, Brian (Jody) Danielson of Dassel and his former wife and friend, Charlene Danielson of Dassel. Duane was preceded in death by his parents Eldon and Lois Mae Danielson and granddaughter Natalie Danielson.

Duane Eldon Danielson, age 65, from Dassel, formerly from Cokato passed away Wednesday, May 20, 2020 at the Augustana Lakeside Health Care Center of Dassel. A interment service will be held at 11:00 a.m. on Saturday, June 6, 2020 at Stockholm... View Obituary & Service Information

The family of Duane Eldon Danielson created this Life Tributes page to make it easy to share your memories.