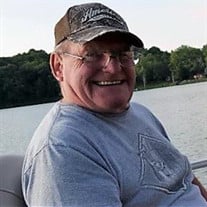 Douglas D. Nelson, age 74, of Dassel, died Wednesday, June 26, 2019, at his home. A graveside service will be held at 11:00 a.m. on Tuesday, July 2nd 2019, at the Dassel Community Cemetery with Rev. Laurie O’Shea officiating. There will be a time to gather with the family at the Gethsemane Lutheran Church following the graveside service. Douglas D. Nelson the son of Myles and Delia (Arnold) Nelson was born on December 8, 1944, in Litchfield, Minnesota. He grew up in the Dassel area and attended Dassel High School. Doug was a lifetime member of the Gethsemane Lutheran Church where he was both baptized and later confirmed. On November 27, 1970, Doug was united in marriage to Margaret “Muggs” Kennedy in Brookings, South Dakota. Together they made their home in Anoka before moving to Dassel. In 1977, they purchased their home where they have since resided. Doug worked in auto body repair at Iten Chevrolet, Brookdale Pontiac, and had a 30-year career at Village Chevrolet in Wayzata. He loved to spend time in the garage tinkering and working on cars, as he had a love for old classic cars and his beloved John Deere lawn mower. He enjoyed mowing the lawn, fishing and spending time at their cabin. He could often be found sitting on the deck watching the deer, birds and just enjoying nature and the wildlife. He was fond of the times he would get together with family, whether it be just visiting, shaking dice or playing cards. Doug had always had a special spot in his heart for his wife, his daughters and grandchildren. He is survived by his wife, Margaret “Muggs” Nelson of Dassel, children, Kelly (Chris) Hyland of Isanti, Minnesota, Kerry (Scott) Kowalski of Chetek, Wisconsin, four grandchildren, Logan Hyland, Nolan Hyland, Peyton Kowalski and Brielle Kowalski, siblings, Mary Jackson of Dassel, Joe Nelson of Dassel, Doris Koser of Portland, Oregon, and sister in law Gail Nelson, of Darwin. He is also survived by several nieces, nephews and other relatives. He was preceded in death by his parents, Myles and Delia Nelson, siblings, Lloyd Nelson, Jerome Nelson, Geri Jorges, Patricia Barritt, and Janet Koelln.

The family of Douglas D. Nelson created this Life Tributes page to make it easy to share your memories.