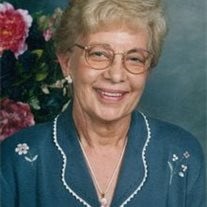 Dorothy Elaine Dahl, age 80, of Darwin died Monday, February 8, 2016, at the St. Cloud Hospital. A memorial service will be held on Monday, February 15, 2016, at 11:00 a.m. at the All Saints Lutheran Church in Darwin with the Rev. Joe Midthun officiating. The interment of the urn will be held at All Saints Lutheran Cemetery in Darwin on a later date. There will be a one hour time to gather with the family at the All Saints Lutheran Church on Monday, February 15, 2016, prior to the service. The Johnson Funeral Home in Dassel is in charge of arrangements. Memorials are preferred to be sent to the building fund at All Saints Lutheran Church in Darwin, Minnesota. Dorothy Elaine "Settergren" Dahl, the daughter of Herman and Doris (Pettit) Settergren was born on August 9, 1935, in Dassel, Minnesota. Dorothy grew up in the Dassel area where she graduated from the Dassel High School in 1953. She was baptized and later confirmed at the First Lutheran Church in Dassel and was presently a member of All Saints Lutheran Church in Darwin. She was an active member of the Order of the Eastern Star in Litchfield for numerous years. On August 20, 1955, Dorothy was united in marriage to Carlton Dahl at the Peace Lutheran Church in Hutchinson. Together they made their home in Dassel for a few years before moving to a farm north of Darwin where Dorothy has resided for the past 55 years. Dorothy had been employed as a bank teller at the Dassel State Bank and the Farmers State Bank in Darwin. She had also been employed at the United States Post Office in Darwin. Dorothy was a humble lady who loved to help and serve others and had a tender spot in her heart for animals in need. She enjoyed spending time in her garden and doing yard work. She loved her grandchildren and enjoyed having holidays and other family events. She will be missed by her family and her friends. Dorothy is survived by her children, Kimberly (William) Newgren of Lakeville, Craig Dahl of Darwin, and Rick Dahl of St. Paul, four grandchildren, Joe Newgren, Jon Newgren, Sean Dahl, and Becky Newgren, siblings, Roger (Elaine) Settergren of Plymouth, Bruce Settergren of Mora, Dale (Jane) Settergren of Dassel, Vickie Schmitz of Annandale and Wanda Anderson of Hutchinson and several nieces, nephew and other relatives. Dorothy is preceded in death by her husband, Carlton on October 19, 1997, her son Michael in October 10, 2013, her parents, a niece, Tammy Anderson, and a nephew, Brian Settergren.

Dorothy Elaine Dahl, age 80, of Darwin died Monday, February 8, 2016, at the St. Cloud Hospital. A memorial service will be held on Monday, February 15, 2016, at 11:00 a.m. at the All Saints Lutheran Church in Darwin with the Rev. Joe Midthun... View Obituary & Service Information

The family of Dorothy Elaine Dahl created this Life Tributes page to make it easy to share your memories.

Send flowers to the Dahl family.