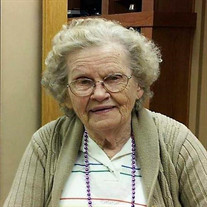 Doris Elaine (Titrud) Settergren, age 102, of Dassel, died Sunday, August 18, 2019, at the Augustana Lakeside Health Care Center of Dassel. A funeral service will be held on Friday at 11:00 a.m. at Lake Jennie Evangelical Covenant Church in rural Dassel with Pastor Douglas Pierce officiating. There will be a visitation from 4:00 p.m. to 6:00 p.m. on Thursday, August 22, 2019, at the Johnson Funeral Home in Dassel and one hour prior to the service at Lake Jennie Evangelical Covenant Church in rural Dassel on Friday. Doris Elaine (Titrud) Settergren was born on November 5, 1916, in Stockholm Township, Wright County, Minnesota to Emil and Emma (Grundahl) Titrud. She was baptized and later confirmed at the Stockholm Lutheran Church in rural Cokato. She graduated from the Cokato High School in 1934. After high school she attended St. Cloud Teachers College where she received her teachers training education. For a number of years, she taught in country schools in western Wright County and eastern Meeker County. While she was teaching at Lake Jennie country school, she met her husband-to-be, Harry Settergren. Harry was enlisted in a 2-year term in the United States Army which became extended for the duration of World War II. When Harry was able to receive a short leave in order to be married, Doris only had a week or two to prepare for their wedding on June 29, 1943. They first lived in San Luis Obispo, California among other service people and their spouses. But when Harry was assigned to the South Pacific, Doris returned to her parental home in Cokato where she resumed teaching for the duration of Harry’s Service. After the war, she and Harry purchased the “home place” from PJ and Alma Settergren and continued the focus on dairy farming. She maintained a flock of chickens and for years sold the eggs from their farm on Hwy 15. She also had an extensive garden that she used to provide food for their growing family, as in the next years, they would celebrate the birth of their four sons. Doris joined Harry as an active member of the Lake Jennie Covenant Church. At Lake Jennie she was a Sunday School Teacher, active in Ladies Aid, and took a leadership positions in both the church and district wide with the Evangelical Covenant Church Women. In later years, as sons, Don and Peter took over the farm, she and Harry were able to travel. They would attend church events, family gatherings and celebrations, Harry’s army reunions, and had the opportunity to travel to Sweden, Norway and Germany. In Doris’s later years she moved to the Augustana Lakeside Health Care Center of Dassel, which had been her home since 2012. She received great care and love from the staff until her death on August 18, 2019. Doris is survived by her four sons, Rev. Paul (Rev. Jane Ann) Settergren of Blaine, Donald Settergren of Dassel, David (Rene) Settergren of Ely, and Peter Settergren of Dassel; three grandchildren, Matthew Settergren, Derek (Elaine) Settergren, and Brian (Erin) Settergren; six great-grandchildren, Ella, Einar, Nora, Otto, Ingrid and Greta Settergren. She is also survived by her brother-in-law, John Wingard of Champlin, Minnesota, along with numerous, nieces, nephews and other relatives. Doris was preceded in death by her husband, Harry on September 4, 2011, her parents, Emil and Emma Titrud, a brother and his wife, Woodrow and Esther Titrud, and a sister Clarine Wingard.

The family of Doris Elaine Settergren created this Life Tributes page to make it easy to share your memories.