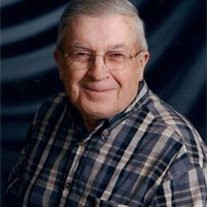 Donald Wayne Rettman, age 77, of Darwin, died Thursday, March 2, 2017, at the Augustana Lakeside Health Care Center in Dassel. A funeral service will be held on Tuesday, March 7, 2017, at 11:00 a.m. at the Gethsemane Lutheran Church in Dassel with the Rev. Daniel Belgum-Blad officiating. The interment will be held at the Dassel Community Cemetery following the Service. A visitation will be held on Monday evening from 4:00 p.m. to 7:00 p.m. at the Johnson Funeral Home in Dassel. There will be a one hour visitation prior to the service at the Gethsemane Lutheran Church on Tuesday morning. Donald Wayne Rettman, the son of Edward and Opal (Ondrachek) Rettman, was born on March 31, 1939, in Ellsworth Township, Meeker County, Minnesota. He grew up in the Darwin area and graduated from Litchfield High School in 1957. Donald was baptized at the Lutheran Church in Stewart, Minnesota and was a member of Gethsemane Lutheran Church at the time of his death. Donald was a member of the Minnesota National Guard and served from 1961 until 1967. He owned and operated Don Rettman Construction for over 50 years. In 1966, Donald was united in marriage to Paulette Arnleend. They made their home in Meeker County and together had three children. On February 6, 1982, Donald was united in marriage at Gethsemane Lutheran Church in Dassel to Georgia Sandstede and gained a daughter. Together they made their home in Ellsworth Township and he continued his excavating business. He was lovingly referred to as "Chief". He enjoyed working on his cars and equipment. Don's passion was collecting and restoring classic cars, several of his vehicles were in local parades and events over the years. He enjoyed helping out people. Don slowed down in 2013, but continued to help people out by doing small projects and other work for them. He enjoyed morning coffee with his friends. He would always stop by to say hello to his numerous friends and acquaintances when he was out in the community. He is survived by his wife, Georgia Rettman of Darwin, children, David (Lisa) Rettman of Minnetonka, Dan (Joleen) Rettman of Litchfield, and Angela (Paul) Haiden of Maple Grove, four grandchildren, Derek Haiden, Amanda Haiden, Samantha Rettman, and Isabelle Rettman. He is also survived by his brother, Edward Rettman of Hutchinson. Donald was preceded in death by his first wife, Paulette and his parents.

Donald Wayne Rettman, age 77, of Darwin, died Thursday, March 2, 2017, at the Augustana Lakeside Health Care Center in Dassel. A funeral service will be held on Tuesday, March 7, 2017, at 11:00 a.m. at the Gethsemane Lutheran Church in Dassel... View Obituary & Service Information

The family of Donald Wayne Rettman created this Life Tributes page to make it easy to share your memories.

Send flowers to the Rettman family.