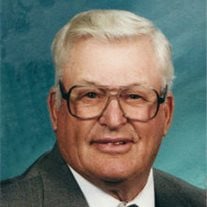 Donald Leslie Danielson, age 95, of Dassel, died Wednesday, March 20, 2013, at the Augustana Lakeside Health Care Center of Dassel. A memorial service will be held on Sunday, March 24, 2013, at 2:30 p.m. at the Gethsemane Lutheran Church in Dassel with the Rev. Steven Olson and Rev. John Peterson officiating. A time to gather with the family will be held one hour prior to the service at the church on Sunday afternoon. The Johnson Funeral Home in Dassel is in charge of the memorial arrangements. Donald Leslie Danielson the son of Joseph and Esther (Broberg) Danielson, was born on July 12, 1917, in Collinwood Township, Meeker County, Minnesota. He grew up in the Dassel area and attended District 22, Steelsville Country School for his education. Donald was baptized and confirmed at Gethsemane Lutheran Church in Dassel and remained a member his entire life. On June 12, 1943, Donald was united in marriage to Adeline Nyberg at the First Lutheran Church in Grove City. Together they farmed in Ellsworth Township before they moved to Cosmos for a few years. From there they moved to Cokato where they lived and farmed for several years. They moved to Dassel 40 plus years ago to the old Albert and Levi Danielson farm. Together they celebrated 66 years of marriage. Donald worked for several years as a union carpenter from 1968 until 1980. He also had been employed at Johnson Seeds of Dassel and farming his own land. He enjoyed spending time farming, gardening, reading, crossword puzzles, and never missed a Bingo game at the care center. Donald was a quiet man who loved his family and his friends. He is survived by his children, Brian (Pam) Danielson of Buffalo, Steven (Cheryl) Danielson of Goldsboro, NC, and Kathleen (Jerry) Johnson of Anoka, six grandchildren, and thirteen great grandchildren, siblings, Frances (Harold Sanken) Olson of Hutchinson, Merlyn (Lucile) Danielson of Hutchinson, Maurice (Georgia) Danielson of Buffalo, and Janice (Tom) Crowe of Dassel. He was preceded in death by his wife, Adeline, infant grandson, Shawn Danielson, parents, and siblings, Lowell Danielson, and Ruth Peterson.

Donald Leslie Danielson, age 95, of Dassel, died Wednesday, March 20, 2013, at the Augustana Lakeside Health Care Center of Dassel. A memorial service will be held on Sunday, March 24, 2013, at 2:30 p.m. at the Gethsemane Lutheran Church in... View Obituary & Service Information

The family of Donald Danielson created this Life Tributes page to make it easy to share your memories.