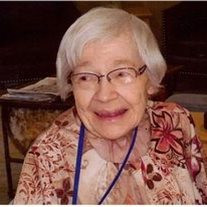 Donajean Mae Dalin, age 94, of Litchfield, died Monday, May 15, 2017, at Bethany Assisted Living in Litchfield. A funeral service will be held on Friday, May 19, 2017, at 10:30 a.m. at the Johnson Funeral Home in Dassel with Pastor Douglas Pierce officiating. The interment will be held at the Bird Island City Cemetery following the service. There will be a one hour visitation prior to the service on Friday morning at the Johnson Funeral Home in Dassel. Donajean Mae (Nelson) Dalin, the daughter of John and Vivian (Kafer) Nelson, was born on October 29, 1922, Olivia, Minnesota. Donajean grew up in the Bird Island area and graduated from the Bird Island High School. She was baptized and later confirmed in the Christian faith and was a member of the Lake Jennie Covenant Church at the time of her death. On July 27, 1945, Donajean was united in marriage to Richard Dalin at Our Saviors Lutheran Church in Bird Island. Together they made their home on a farm in Washington County for a short time. Then they moved on a farm in Renville County for a few years. Donajean and Richard moved to the Twin Cities area and following retirement moved to Scandia. In 2005, Donajean moved to Litchfield where she has since resided. Donajean had been employed with the Saint Paul Insurance Company where she was employed as a clerk in the claims department for several years. Donajean was a wonderful host who was attenuative to peoples likes and dislikes and would prepare a special meal with her family's favorite items. She liked completing crossword, jigsaw, word search puzzles and playing games. She was an enjoyed playing the organ and the piano for her family and herself. Donajean spent many hours studying and reading the bible. She will be missed by her family. She is survived by her children, Kay Langness of Litchfield, and Gary Dalin of Litchfield, three grandchildren, Anthony Langness, Christopher Langness and Keith Shaw, eight great grandchildren, Heather Langness, Heather Stueber, Josh Lies, Ashley Nelson, Braeden Lies, Alexandra Maahs-Stewart, Austin Shaw, and Jordan Shaw and 8 great-great grandchildren. She is also survived by one sister, Gwendolyn (Earl) Lenz of Waite Park. She was preceded in death by her husband, Richard, and her parents.

Donajean Mae Dalin, age 94, of Litchfield, died Monday, May 15, 2017, at Bethany Assisted Living in Litchfield. A funeral service will be held on Friday, May 19, 2017, at 10:30 a.m. at the Johnson Funeral Home in Dassel with Pastor Douglas Pierce... View Obituary & Service Information

The family of Donajean Mae Dalin created this Life Tributes page to make it easy to share your memories.

Send flowers to the Dalin family.