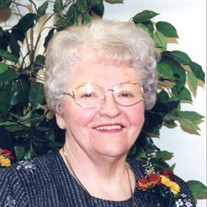 Dolores Willette, age 93, of Litchfield, formerly of Dassel, died Tuesday, December 21, 2021, at the St. Cloud Hospital. A memorial service will be held on Wednesday, December 29, 2021, at 2:00 p.m. at the Gethsemane Lutheran Church in Dassel with Rev. Janine Olson officiating. The interment of the urn will be held at Ripley Cemetery in Litchfield following the service. There will be a time to gather with the family one hour prior to the service at the Gethsemane Lutheran Church on Wednesday. Dolores Gladys Sophia Kuehl Willette was born December 3, 1928 in Forest City township to Walter and Laura Rosenow Kuehl. Her baptism and confirmation were celebrated at St Matthew’s United Church of Christ in Forest City. She went to District 5 Elementary school through 8th grade and Litchfield high school for a year and a half. She then went to the Hollywood Beauty Academy in Minneapolis, graduated in November of 1946, and practiced as a licensed hairdresser for the next 60 years. While in school in Minneapolis, she met the love of her life when they were set up on a blind date by friends. Dolores and Wallace Arthur Willette were united in marriage at St Matthew’s on March 20, 1948 and celebrated 73 years together. They were blessed with two children, Suzanne Donna Ruth Willette Ahlbrecht, and Paul Wallace Willette. Wally and Dolores lived in St Paul where Wally attended barber school, and they both practiced the profession there for about 10 years, until Wally bought the barber shop in Dassel in 1963. Dolores worked out of a shop in her home. They have been active members of Gethsemane Lutheran Church since 1964. When their son Paul was diagnosed with an intellectual disability as a toddler, Dolores became a staunch advocate for the rights of people with disabilities. At that time, few services were available in this part of the state and she had to drive him to school in Biscay and pick him up every day. To protect people with disabilities, and to expand options for their care, Dolores wrote letters, made phone calls, and lobbied politicians. She joined numerous committees, organizations, and boards, including ARC, the library board, the Christian Service Committee, and the board of directors at Meeker County’s Multi-Care and Community Homes, where she continued to serve as treasurer up until last year. She baked cookies, sold flowers, poured coffee, taught Sunday school, and continued to serve other people and God right up until her last few days. Wally and Dolores moved to Litchfield in 1989 to be closer to Paul. It took her 50 years, but she got her GED at the age of 68. Her free time was spent doing crossword puzzles, watching the Twins and Vikings, reading, cooking, and baking. Every year she made piles and piles of cookies, bars, candy, jelly, and breads to give away to friends and family. She spent her days serving others and cherished spending time with family. Dolores was preceded in death by her parents, Walter and Laura Kuehl; mother and father-in-law, Leona and Arthur Willette; son Paul Willette; daughter Suzanne Ahlbrecht and son-in-law Allen Ahlbrecht; sisters and brothers-in-law Alice and Art Reilein, Diane and Willard Maahs, Ruth and Bud Marquardt, Jeanette Byrne and Bonnie Revering; and brother Walter Kuehl, Jr. She is survived by her husband Wally; grandchildren Laurel Ahlbrecht, Rebecca (Shawn) Dillingham, and Allen Ahlbrecht; great-grandchildren Aleisha Ahlbrecht, Dan Ahlbrecht, and Samantha Mortenson; sisters-in-law Donna Kuehl and Donna (Albert) Rademacher; and many, many nieces, nephews, and dear friends. She has touched countless lives and will be greatly missed.

Dolores Willette, age 93, of Litchfield, formerly of Dassel, died Tuesday, December 21, 2021, at the St. Cloud Hospital. A memorial service will be held on Wednesday, December 29, 2021, at 2:00 p.m. at the Gethsemane Lutheran Church in Dassel... View Obituary & Service Information

The family of Dolores Gladys Sophia Willette created this Life Tributes page to make it easy to share your memories.

Send flowers to the Willette family.