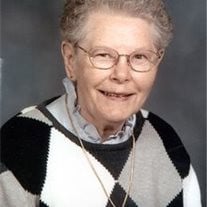 Dolores Mae Orzolek, age 85, of Litchfield, died Thursday, January 8, 2015, at the Emmanuel Home in Litchfield. A funeral service will be held at 10:30 a.m. on Saturday, May 16, 2015, at the Johnson Funeral Home in Dassel with the Fr. Brian Mandel officiating at the service. The interment will be held at the Union Cemetery in Atwater. A time to gather with the family will be held one hour prior to the service at the Johnson Funeral Home in Dassel on Saturday, May 16, 2015. Dolores Mae (Miller) Orzolek, the daughter of C.H. Ferdinand and Hazel (Olson) Miller, was born on September 13, 1929, in Belgrade, Minnesota. Dolores grew up south of Grove City and graduated from the Grove City High School in 1948. Dolores was baptized and confirmed in the Christian faith and was presently a member of St. John's Catholic Church in Darwin. On July 30, 1960, Dolores was united in marriage to Frank Orzolek at St. Stanislaus Catholic Church in New Haven, Connecticut. Together they made their home east of Darwin. Dolores had been employed as a secretary for the St. Philips Catholic School in Litchfield for several years and later was employed as a secretary for Nicholson Accounting in Litchfield. She enjoyed sewing, embroidery, crocheting, gardening, canning, and doing word find puzzles. She loved to listen and play music and was a member of the St. John's Catholic Church Choir. Dolores was a member of the VFW Auxiliary in Litchfield and worked weekly at the VFW Bingo night. She was also a member of the Dassel Historical Society. Dolores and Frank enjoyed traveling and had traveled around the country from New Mexico to Hawaii, Washington D.C. to Colorado. Every year at Christmas time, Dolores always would make fruit cakes to give to her family and friends, often taking a day to travel around delivering fruit cakes. She is survived by her son, Frank (Terri) Orzolek of Darwin, two grandsons, Mark and Steven Orzolek, and two sisters, Maxine Rasmussen of Willmar and Margaret Palmer of Grove City. She was preceded in death by her husband, Frank, daughter, Elaine Sedlacek, son-in-law, Wally Sedlacek, brother, Wendell Miller, infant brother, Charles Miller, and her foster parents, Minnie and Gust Peterson.

Dolores Mae Orzolek, age 85, of Litchfield, died Thursday, January 8, 2015, at the Emmanuel Home in Litchfield. A funeral service will be held at 10:30 a.m. on Saturday, May 16, 2015, at the Johnson Funeral Home in Dassel with the Fr. Brian... View Obituary & Service Information

The family of Dolores Mae Miller Orzolek created this Life Tributes page to make it easy to share your memories.