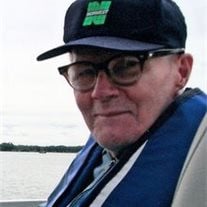 Dennis Walter Johnson, age 75, of Watkins, formerly of Dassel, died Thursday, April 13, 2017, at the Hilltop Health Care Center in Watkins. A funeral service will be held at 11:00 a.m. on Monday, April 17, 2017, at Stockholm Lutheran Church, rural Cokato, with the Rev. Mark Little officiating. The interment will be held in the Stockholm Lutheran Cemetery following the service. A visitation will be held on Monday one hour prior to the service at the Stockholm Lutheran Church. Dennis Walter Johnson, the son of Joseph and Mabel (Nordberg) Johnson, was born on June 30, 1941, in Litchfield, Minnesota. Dennis was baptized and confirmed at the Stockholm Lutheran Church. He grew up in the Dassel area and graduated from the Dassel High School in 1959. After graduation, Dennis served in the United States Army, from January to March 1964 at Fort Leonard Wood, MO. Dennis had been employed by the Northland Canning Company and helped with the farming and other chores on the family farm. Dennis loved his family. He was always interested in their activities and never forgot their birthdays. He participated in most of the activities at the Care Center, especially bingo and Wii bowling. He loved to spend time with his family and enjoyed the many parades that he would attend during the summer. He loved listening to polka music and watching the annual antique car run. He enjoyed all sports and especially enjoyed to Minnesota Twins. He is survived by his siblings, Paul Johnson of Elk River, twin sister, Doris (Duane) Swenson of Delano, C.W. Johnson of Mahtomedi, Ralph Johnson of Minnetonka, Charlotte Kelly of Aiken, SC, and Galen Johnson of Long Lake. further survived by nephews Greg (Laura) Swenson and Jeff (Cheri) Swenson and nieces Pamela (Mike) Lewis, Marnie (Brian) Jopp and Carissa (Brian) Dack. He was preceded in death by his parents.

The family of Dennis Walter Johnson created this Life Tributes page to make it easy to share your memories.