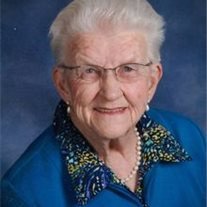 Deloris Charlotte Regal, age 87, of Cokato, died Wednesday, January 6, 2016, at the Cokato Manor in Cokato. A funeral service will be held on Wednesday, January 13, 2016, at 1:30 p.m. at Gethsemane Lutheran Church in Dassel with the Rev. Daniel Belgum-Blad officiating. The interment will be held at the Dassel Community Cemetery following the service. There will be a visitation one hour prior to the service at the Gethsemane Lutheran Church in Dassel. The Johnson Funeral Home in Dassel is in charge of the funeral arrangements. Deloris Charlotte (Anderson) Regal, the daughter of Andrew and Hilda (Sorenson) Anderson was born on July 24, 1928, in Princeton, Minnesota. She was baptized in the Lutheran faith in Princeton, Minnesota, and was confirmed at the First Lutheran Church (Gethsemane Lutheran) in Dassel where she was presently a member of Gethsemane Lutheran at the time of her death. Deloris and her family moved to Dassel where she spent her teens and graduated from the Dassel High School in 1947. On November 22, 1947, Deloris was united in marriage to Claire Warren Regal at the First Lutheran Church (Gethsemane Lutheran) in Dassel. Together they made their home in Dassel from 1947 until 1968, when Deloris and Claire moved to Belmond, Iowa, and in 1982, they moved to Cokato where she has made her home since. Deloris had been employed For several years as a telephone operator in Dassel, as a clerk at the Ben Franklin Store in Belmond, Iowa and as a bank teller at the First National Bank in Cokato. Deloris enjoyed golfing, cards, knitting, and gardening. She was a wonderful cook and enjoyed spending time with her family for holidays and special events. She loved her family and especially enjoyed her grandchildren and great grandchildren. She had a good sense of humor and loved to spend time with her friends. She is survived by her children, Ron (Nancy) Regal of Las Vegas, Nevada, Carol McLaughlin of Salt Lake City, Utah, and Joel Regal of Cokato, five grandchildren, Molly (Josh) Jensen, Josh (Lisa) Fuller, Matt Fuller, Sara (Tyler) Davis, and Brittney (Ross) Wertjes, eight great grandchildren, Gabe Fuller, Tyler Fuller, Emily Fuller, Dylan Fuller, J. T. Davis, Claire Davis, Maverick Fuller, and Chloe Jensen. She is also survived by several nieces and nephews and other relatives. Deloris was preceded in death by her husband, Claire on September 28, 2006, her daughter, Sue, her parents, and her two sisters, Lillian Backlund and Evelyn Samuelson.

Deloris Charlotte Regal, age 87, of Cokato, died Wednesday, January 6, 2016, at the Cokato Manor in Cokato. A funeral service will be held on Wednesday, January 13, 2016, at 1:30 p.m. at Gethsemane Lutheran Church in Dassel with the Rev. Daniel... View Obituary & Service Information

The family of Deloris Charlotte Regal created this Life Tributes page to make it easy to share your memories.

Send flowers to the Regal family.