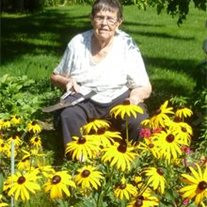 Delores Ruth Lundin, age 84, of Litchfield, died Thursday, August 27, 2015, at the Meeker Memorial Hospital in Litchfield. A funeral service will be held on Monday, August, 31, 2015, at 11:00 a.m. at the First Lutheran Church in Litchfield with the Rev. Robert Iverson officiating. The interment will be held at Lake Ripley Cemetery in Litchfield following the service. There will be a visitation Sunday evening from 4:00 p.m. To 8:00 p.m. at the First Lutheran Church in Litchfield and one hour prior to the service on Monday at the church. The Johnson Funeral Home in Dassel is in charge of the funeral arrangements. Delores Ruth Lundin, the daughter of John and Ruth (Danielson) Johnson, was born on July 3, 1931, in Darwin Township, Meeker County, Minnesota. She grew up in the Darwin area and attended country school for her education. Delores was baptized at Swan Lake Lutheran Church and confirmed at First Lutheran Church of Litchfield where she remained an active member. On June 25, 1950, Delores was united in marriage to Einar O. Lundin at First Lutheran Church. Together they made their home on the Lundin farm, where they have since resided and recently this summer celebrated their 65th wedding anniversary. Delores loved driving tractor and doing field work. She also worked for many years with Fricke Catering and later Muriel Larson Catering. She enjoyed gardening, canning, baking, quilting, and Bible study. She especially enjoyed family times, her grandchildren, her great grandchildren and visiting with friends. She always loved to go fishing with her late brother Donald. Her family was the most important part of her life and she will be deeply missed. Delores is survived by her: Husband, Einar Lundin of Litchfield; Children, Harold (Marilyn) Lundin of Litchfield, Elaine (Jim) Lenhard of Litchfield, and Judy (David) Walstad of Chanhassen; Five grandchildren, Lisa (Chris) Maas, Sara (Chris) Wilke, Angie Willers (fiancée Jared Kopplow,) Alexis Walstad, Kelsey Walstad (boyfriend Joe Beisman); Five great grandchildren, Ellie, Isaac, Amelia, and Nora Wilke and Kysten Willers. She was preceded in death by her grandson, Joel Lenhard, great granddaughter, Tenley Wilke, parents, and a brother, Donald Johnson. Peace be to her memory.

Delores Ruth Lundin, age 84, of Litchfield, died Thursday, August 27, 2015, at the Meeker Memorial Hospital in Litchfield. A funeral service will be held on Monday, August, 31, 2015, at 11:00 a.m. at the First Lutheran Church in Litchfield with... View Obituary & Service Information

The family of Delores Ruth Lundin created this Life Tributes page to make it easy to share your memories.

Send flowers to the Lundin family.