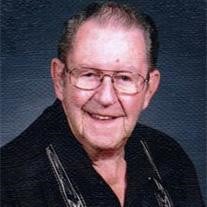 Dean Thomas Gayner, age 81, of Dassel, died Sunday, October 14, 2012, at his home. A memorial service will be held on Wednesday, October 17, 2012, at 11:00 a.m. at the Gethsemane Lutheran Church in Dassel. There will be a visitation from 4:00 p.m. to 7:00 p.m. on Tuesday evening at the Johnson Funeral Home in Dassel and one hour prior to the service on Wednesday at the church. Military honors by the Paul F. Dille American Legion. Dean Thomas Gayner, the son of Karl and Hazel (Thompson) Gayner, was born on December 6, 1930, in Litchfield, Minnesota. Dean grew up in the Dassel area and graduated from Dassel High School. He was baptized and confirmed in the Christian faith and was a member of the Gethsemane Lutheran Church. Dean was inducted into the United States Army and was stationed in Germany. Upon his return to the Dassel area he worked with his parents operating the Gayner Hardware Store on Main Street Dassel. On March 2, 1957, Dean was united in marriage to Arlys Noreen Rieck at the St. James Lutheran Church in Howard Lake, Minnesota. Together they made their home in Dassel where they raised their three children. Dean purchased the hardware store from his father and operated the store until 1981. The Gayner family had owned and operated the Gayner Hardware for 81 years. Dean opened a small engine repair shop, which he ran for several years. Dean was also employed by the Dassel Cokato School District as a School Bus Driver for numerous years. In 1981, Dean and Arlys moved to Lake Washington where they resided for over 30 years. Dean was active in many organizations in Dassel. He was a member of the Dassel Fire Department for 26 years, a 54 year active member of the Paul F. Dille American Legion and an active member of the Dassel Historical Society. For several years, Dean was one of the official record keepers of the Lake Washington Ice Out Contest and a member of the Dassel Sportsman Club and the Lake Washington Lake Association. He was a 50 year member of the Dassel Commercial club, and was an original committee member of Red Rooster Days, had served as head chair for six years, financial committee chair for ten years, and was the advertising chair for 20 years. He co-chaired the first all Dassel school reunion. He enjoyed spending time hunting, fishing, sports, and was an avid baseball fan. Dean was inducted into the North Star League Baseball Hall of Fame in 2005. He was a member of the breakfast club and could often be found shaking dice at one of the local restaurants during morning coffee. He loved to watch his grandchildren's sporting events and was one of their avid fans. He will be deeply missed by his family and friends Dean is survived by his children, Thomas (JoAnn) Gayner of Dassel, Rae Gayner of St. Paul, and Jenna (Terry) O'Brien of Dassel, three grandchildren, Andi Gayner, Cole O'Brien, and Maureen O'Brien. He was preceded in death by his spouse, Arlys, grandson Derek, parents, Karl and Hazel, and his brothers, Duane and Gene.

The family of Dean Gayner created this Life Tributes page to make it easy to share your memories.

Send flowers to the Gayner family.