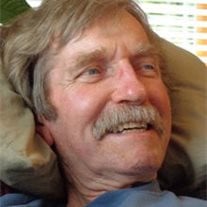 Dean Elton Ailie, Age 72, of Cokato, MN, passed away at home in Cokato surrounded by his family on Sunday October 6, 2013 from complications of cancer and Parkinson's disease. A wake will be held on Friday, October 11, 2013 at the Johnson Funeral Home in Dassel at 5pm, with a memorial service starting at 7:30pm. At Dean's request, in lieu of a traditional funeral, we will have a Life Celebration Party the afternoon of Saturday, October 12, 2013, beginning at 3 pm in the afternoon at their prior home, North of Dassel. Please join us for some of Dean's favorite music, foods, and beverages while we share and reminisce over your/our memories of Dean. Memorials will be divided between the Dassel and Cokato Fire Departments. Dean Elton Ailie was born in his parents' home in Dassel, MN on August 31, 1941. He was confirmed in Christ in 1954 at the age of 12. He attended Dassel High School through 10th grade when he joined the US Army at the age of 16. He was a member of the 82nd Airborne for three years. He was stationed at Fort Bragg, North Carolina. During his years in the service, he traveled to Puerto Rico, Florida, Colorado, and Alaska for training exercises. He was honorably discharged at the age of 19. He returned to Dassel, MN where he met Betty M Cooley. They were joined in marriage on February 23, 1963 at the Evangelical Covenant Church in Dassel, MN. They just celebrated their 50th wedding anniversary this year. Dean received his GED in 1967. Dean lived in Dassel all his life until he and Betty recently moved to Cokato, MN. Dean had many adventures as a boy in rural MN (you may have seen his German motorcycle at the Dassel Museum during Red Rooster Days. He sunk it in Big Swan Lake as a young man and it was just recovered in the fall of 2012!). His boyhood adventures also took him to Mississippi and Tennessee. As an adult he traveled to SD, WI, LA, MS, NV, and Hawaii, but he usually preferred to stay closer to home. His hobbies included auto body and mechanical work, woodworking, gardening, fishing, snowmobiling, and the love and appreciation of nature. He was a very loving father, giving hugs and saying "I love you" daily. He was an involved grandpa and often on the floor playing with the kids and the animals. Although he knew how to play and relax, he also was a hard worker and a very good employee. He worked as a machinist at Storm Industries and JLCO of Dassel, MN, and retired from Pengo Corporation of Cokato in 2010 after 25 years of dedicated service. Dean was a man of few words, but when he did speak, it was usually a humorous wisecrack comment or something important- so you better listen! Living up to his nickname, "Smiley Ailie," he was joking around and grinning up to his last days on earth. We have faith that he will keep the Father, Son and Holy Spirit shaking their heads and smiling with joy just as he has with all of us for the past 72 years. His parents, Wyman and Ardis Ailie, his brother, Donny Ailie, his nephew, Jimmy Parks, and too many dear friends precede him in death. He will be profoundly missed by his surviving wife, Betty Ailie, his daughters, Lisa Ailie-Murphy, St Cloud, MN, and Andrea (Dominic) Verhey, Cokato, MN; his grandchildren, Tyler (Rachel) Murphy of 29 Palms, CA, Jessa Murphy, St. Cloud, MN and Zoe Verhey, Cokato, MN; his great granddaughter, Ailie Jean Murphy, 29 Palms, CA; his sister, Lois (Dale) Nordstrom, Dassel, MN, his sister-in-law Elaine Ailie, Monticello, MN, and all of his other family and friends.

Dean Elton Ailie, Age 72, of Cokato, MN, passed away at home in Cokato surrounded by his family on Sunday October 6, 2013 from complications of cancer and Parkinson's disease. A wake will be held on Friday, October 11, 2013 at the Johnson Funeral... View Obituary & Service Information

The family of Dean Elton Ailie created this Life Tributes page to make it easy to share your memories.

Send flowers to the Ailie family.