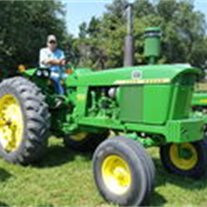 David E. Myllykangas, age 58, of rural South Haven, died Wednesday, March 21, 2018, at the St. Cloud Hospital. A funeral service will be held at 11:00 a.m. on Monday, March 26, 2018, at the Kingston Community Center with Pastor Orval Wirkkala officiating. The interment will be held at the Apostolic Lutheran Cemetery in Kingston. There will be a visitation from 4:00 p.m. to 7:00 p.m. at the Johnson Funeral Home in Dassel on Sunday evening. There will be a one-hour visitation prior to the service on Monday morning at the Kingston Community Center. In lieu of flowers, donations are preferred to be sent to the Juvenile Diabetes Research Foundation. David E. Myllykangas, the son of James and Vera (Vogelpohl) Myllykangas, was born on February 22, 1960, in St. Cloud, Minnesota. He was baptized and confirmed in the Christian faith. He graduated from the Kimball High School. On June 9, 1990, David was united in marriage to Nancy Schultz at the Gethsemane Lutheran Church in Dassel. Together they made their home in the Kingston area. My brother, my best friend, Dave David liked work, farming, work, trucking, more work, and breakfast club. He started putting duals on toy tractors when he was around 6 years old and it never stopped. He started cultivating when he was 9 and was running the combine when he was the ripe old age of 12 or 13 years old. Dave used to make fields back in the woods behind Everett's house for his toy tractors and farm implements. Later, he began using the lawn mower to 'plow' those fields. The bigger the trucks, tractors, tires and number of axles, the better! When Dave was healthy, he was the person to go to when you needed help. He loved to build farm-related items. He didn't have time for hunting and fishing because he was already doing what he loved: working. It was difficult to watch as each year went by and he wasn't able to do what he could do the year before. The doctors would shake their heads and say, "You are a tough SOB!" The hardest thing he did in his life was quit farming. He didn't complain about his health, he just dealt with it. Dave didn't like asking for help. I often wonder if he had been healthy, what he could've accomplished. Dave and I talked every single day the last 15 years... He is survived by his wife, Nancy Myllykangas of South Haven, children, Janelle Vogel of Minneapolis, and Jeremy (Jenelyn) Vogel of Sartell, two grandchildren, Jagger and Jaxen Vogel, father, James Myllykangas of Litchfield, brother, Bill (Helen) Myllykangas of Kingston, nieces, Laura (Nick) Myllykangas Wittrock and Katy Myllykangas. He is also survived by numerous relatives and friends. He was preceded in death by his mother, Vera Myllykangas and his maternal and paternal grandparents.

The family of David E Myllykangas created this Life Tributes page to make it easy to share your memories.