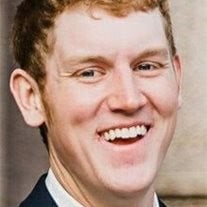 David Scott Elmquist, age 24, of Plymouth, formerly of Cokato, died Friday, February 9, 2018, at the Hennepin County Medical Center in Minneapolis. A funeral service will be held on Friday, February 16, 2018, at 11:00 a.m. at the Good Shepherd Free Lutheran Church in Cokato with Pastor Rob Edwards officiating. The interment of the urn will be held at the Good Shepherd Lutheran Church Cemetery in the Spring. A time to gather with the family will be held on Thursday February 15, 2018, from 4:00 p.m. to 7:00 p.m. and one hour prior to the service on Friday at the Good Shepherd Lutheran Church in Cokato. In lieu of flowers monetary donations are preferred and can be made out to Emily Elmquist. These donations will be used for medical expenses. David Scott Elmquist, the son of Scott and Nancy (Burslie) Elmquist was born on February 24, 1993, in Buffalo, Minnesota. David was baptized and confirmed at the Good Shepherd Free Lutheran Church in Cokato. He grew up in rural Cokato and attended Dassel Cokato High School, graduating in 2011. David continued his education by attending the Association Free Lutheran Bible School in Plymouth. He had been employed at Ron's Service Station in Dassel and then had traveled to North Dakota to work in the oil fields with his brother, Eric. David was united in marriage to Emily Manninen on March 11, 2017, at the Landmark Center in St. Paul. Together they made their home in Plymouth where David had been employed by Bergerson-Caswell, Inc. in Maple Plain, working on a water well digging rig doing well treatment and maintenance. He enjoyed spending time with his family for holidays and special get togethers. He had a special spot in his heart for his nieces and nephews. He loved to spend time skiing, golfing, playing Xbox, watching and rooting for the Vikings, and could often be found playing and going for walks with his dog, Mosely. He will be deeply missed by his family and his many friends. He is survived by his wife, Emily Elmquist of Annandale, Minnesota; parents, Scott and Nancy Elmquist of Cokato, Minnesota; siblings, Amy (Erik) Hartsoch of Ray, North Dakota; Eric (April) Elmquist of Tioga, North Dakota; and Seth (Nicole) Elmquist of Buffalo, Minnesota; six nieces and nephews, Ben Hartsoch, Jake Hartsoch, Michael Hartsoch, Ellery Hartsoch, Madi Elmquist, and Myles Elmquist, maternal grandmother, Ellen Burslie of McIntosh, Minnesota; paternal grandmother, Lorraine Elmquist of Cokato, Minnesota;. He is also survived by mother and father in law, Eric and Jackie Manninen of Annandale, Minnesota; his three sisters-in-law, Hailey Manninen of Annandale, Minnesota; Maila Manninen of Annandale, Minnesota; Tarja Manninen of Annandale, Minnesota; and a brother-in-law, Logan Manninen of Annandale, Minnesota. He was preceded in death by his maternal grandfather, Birdean Burslie, and paternal grandfather, Bill Elmquist and an uncle James Burslie.

David Scott Elmquist, age 24, of Plymouth, formerly of Cokato, died Friday, February 9, 2018, at the Hennepin County Medical Center in Minneapolis. A funeral service will be held on Friday, February 16, 2018, at 11:00 a.m. at the Good Shepherd... View Obituary & Service Information

The family of David Scott Elmquist created this Life Tributes page to make it easy to share your memories.

Send flowers to the Elmquist family.