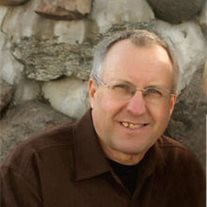 David Merlin Ahlgren, age 66, of Darwin, died Friday, July 28, 2017, in rural Darwin. A funeral service will be held at 11am on Friday, August 4, 2017, at the Church of Christ in Dassel with Pastor Ronald Ahlgren officiating. The interment will be held at the Dassel Community Cemetery following the service. There will be a visitation from 5pm to 8pm on Thursday evening at the Johnson Funeral Home in Dassel and one hour prior to the service at the church on Friday. David Merlin Ahlgren, the son of Stanley and Lucille (Radunz) Ahlgren was born on May 5, 1951, at the Meeker County Memorial Hospital in Litchfield, Minnesota. David grew up on the family farm helping with chores and the field work. He attended country school district #1093, before attending Dassel High School where he graduated in 1969. As a teenager, David was baptized at the Church of Christ in Litchfield and has been a faithful member of the Church of Christ in Dassel for nearly 44 years. On September 1, 1973, David was united in marriage to Mary Hellwig at the St. Peter's Lutheran Church in Ellsworth Township in Meeker County, Minnesota. Together they made their home just down the road from the Ahlgren family home place. He knew he wanted to farm at a very young age. He started to raise chickens and later took care of his brother's pigs. His hobbies then turned to tropical fish and eventually to raising turkeys, waterfowl, ducks, geese and swans, selling at game shows and to taxidermists. He shared his passion for farming with his kids and grandkids. He loved tiling, fencing, bulldozing, excavating, clearing land, burning brush, killing weeds and cutting hay. He had an aversion to trees…always clearing them to make more farmland. He enjoyed collecting antique tractors, as well as model replicas. He was very strong in his faith and wasn't afraid to share it with others. "Are you right with the Lord?" was a phrase taken from his mother that he used often. David served on the church board and as a Sunday School teacher. He loved God and his family, and would often sneak away to share his Schwan's ice cream and candy with his grandchildren. David was known for providing comic relief to those that he was around. He had an innate ability to ask deeply personal questions to people and get them to open up to him. He is survived by his wife, Mary Ahlgren of Darwin, his children, Heidi (Darrel) Terning of Darwin, Holly (Paul) Niedzielski of South Haven, Heather (Aaron) Hobert of Cokato, and Rick (Sarah) Ahlgren of Darwin, 16 grandchildren, siblings, Joanne (Ron) West of Joplin, Missouri, Richard (Jeanne) Ahlgren of Plymouth, Ronald (Barb) Ahlgren of Holton, Kansas, Robert (Connie) Ahlgren of Dassel, Steve (Pam) Ahlgren of Darwin, and Galen (Susan) Ahlgren of Darwin. He was preceded in death by his infant son, Zachary and his parents, Stanley and Lucille Ahlgren. He will be deeply missed by all of those who knew and loved him.

David Merlin Ahlgren, age 66, of Darwin, died Friday, July 28, 2017, in rural Darwin. A funeral service will be held at 11am on Friday, August 4, 2017, at the Church of Christ in Dassel with Pastor Ronald Ahlgren officiating. The interment will... View Obituary & Service Information

The family of David Merlin Ahlgren created this Life Tributes page to make it easy to share your memories.

Send flowers to the Ahlgren family.