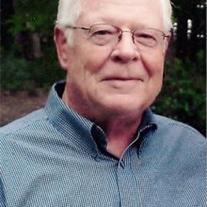 Darrel Dean Upton, age 77, of Darwin, died Monday, September 10, 2012, at the Harmony River Living Center in Hutchinson. A funeral service will be held on Friday, September 14, 2012, at 11:00 a.m. at the Gethsemane Lutheran Church in Dassel with the Rev. Steven Olson officiating with the eulogy by Rev. Raymond Haugland. The interment will be held at the Riverside Cemetery in Plymouth, Michigan on a later date. There will be a visitation on Thursday evening from 5:00 p.m. to 8:00 p.m. at the Johnson Funeral Home in Dassel and one hour prior to the service at the church on Friday morning. In lieu of flowers memorials can be sent to: Connect Care Home Care and Hospice, 211 Freemont Ave SE, Hutchinson, Minnesota 55350. Gethsemane Lutheran Church, P.O. Box C, Dassel, Minnesota 55325. Shepherd of the Hills Lutheran Church, P.O. Box 17444, Fountain Hills, AZ 85269. Darrel Dean Upton, the son of Perry & Inez (Bohnsack) Upton, was born on August 14, 1935, in Marietta, Minnesota. He grew up in the Marietta area and graduated from Marietta High School. Darrel was baptized and confirmed in the Christian faith and was a member of the Gethsemane Lutheran Church at the time of his death. After high school Darrel farmed for a year in Marietta. On October 15, 1955, Darrel was united in marriage to Joyce Eidem. From 1957-1966 he was enlisted in the Army National Guard of Minnesota. Darrel and Joyce lived in Minneapolis where Darrel was employed with Minnesota Rubber Company in 1966 as a Salesman. In 1968, his territory was changed and they moved to the Detroit, Michigan area where Darrel had resided until 1999. On April 9, 1999, Darrel was united to Sheri Smith at the Gethsemane Lutheran Church in Dassel. Together they made their home on Lake Stella near Darwin and enjoyed wintering in Arizona. Darrel loved spending time with his family and spoiling his grandchildren. He was always busy and especially enjoyed mowing the grass and trimming his trees and bushes. He was an avid golfer who always had time for another 18 holes. He was a member of the Paul F. Dille American Legion, the Darwin Lions Club and the Mens Club in Fountain Hills, AZ. He was a sincere and easygoing gentleman who always took the time to visit with friends, family and loved to meet new friends. He will be deeply missed by his family and friends. Darrel is survived by his wife, Sheri Upton of Darwin, MN, daughter, Laurie (Art) Davis of Northville, MI, step-children, Rory (Peggy) Smith of Dassel, MN, and Tracy (Andrew) Lawson of Loretto, MN, 8 grandchildren, Ryan Davis, Julie Davis, Becky Davis, Adam Smith, Courtney Smith, Kelly Lawson, Will Lawson and Drew Lawson, one sister, Marlyce (Ed) Hoium of Madison, MN, and a niece Holly (Gary) Meyer of Revillo, SD. He was preceded in death by his wife, Joyce on August 9, 1991, and his parents.

Darrel Dean Upton, age 77, of Darwin, died Monday, September 10, 2012, at the Harmony River Living Center in Hutchinson. A funeral service will be held on Friday, September 14, 2012, at 11:00 a.m. at the Gethsemane Lutheran Church in Dassel... View Obituary & Service Information

The family of Darrel Upton created this Life Tributes page to make it easy to share your memories.

Send flowers to the Upton family.