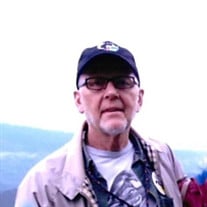 Darrel Ernest Nyman, age 72, of Dassel, formerly of Litchfield, died Wednesday, April 22, 2020, at his home. A memorial service will be held on Friday, October 22, 2021, at 11:00 a.m. at the Zion Lutheran Church in Litchfield. The Interment will be held at the Dassel Community Cemetery. Military Honors will be provided by the Paul F. Dille American Legion Post in Dassel with the United State Army Flag Honor Squad. The Johnson Funeral Home in Dassel is in charge of the memorial arrangements. Darrel Ernest Nyman, the son of Ernest and Irene (Carlson) Nyman was born on March 21, 1948, in Hutchinson, Minnesota. He spent the next eighteen years growing up on the family farm four miles south of Dassel on the Bear Lake Road. Darrel was baptized at First Lutheran Church in Dassel. He went to Collins School, District #1121 for the first six years of his education. He finished jr. and sr. high school at Dassel High School. Graduating in the spring of 1966. After high school, Darrel attended Dunwoody Institute. While attending Dunwoody and living in the Twin Cities, Darrel met his true love, Geri Lewis. After graduating from Dunwoody in April of 1968 and the military draft hot on his heels, Darrel and Geri decided to get married before he left for military service. They were united in marriage on June 15, 1968, at the First Lutheran Church in Dassel. Eleven days later Darrel reported for duty. After basic training, Darrel along with his young bride traveled to Fort Riley, Kansas. They spent 22 months there and during that time were blessed with a daughter, Jacki. After separation from the service the family moved back to Dassel in June of 1970. They later moved down by Hutchinson. During that time Darrel worked for Wigen Chevrolet. In 1976, he went to work for Fenton Chevrolet and Cadillac. The family then moved to Litchfield. In 1981, Darrel went to work at Ferguson Corp. with John Ferguson and later Ken Greening and Dave Holmgren. Darrel retired on March 31, 2014. After coming to Litchfield, Darrel, Geri, and Jacki made their faith home at Zion Lutheran Church. Through the years, Darrel had served on various boards and committees and taught Sunday School for four years. With his connection with the automotive business, he was active for many years in the St. Cloud Parts & Service Guild and had served two terms as President. Darrel enjoyed working with wood. In his later years he enjoyed turning wood bowls. He also enjoyed stain glass hobby. He very much enjoyed time with his family and just being at home. He is survived by his wife Geri, daughter, Jacki DiGregorio, grandson, Tony DiGregorio, brothers, John (Bettie) Nyman of Dassel, Allen (Linda) Nyman of Hutchinson, Galen Nyman of Dassel and his significant other, Marlyce Erickson along with nieces, nephews, and many cousins. He was preceded in death by his grandson, Alexander Paul Di Gregorio, son-in-law, Robert DiGregorio, parents, Ernest and Irene Nyman, and one sister-in-law, Pam Nyman.

Darrel Ernest Nyman, age 72, of Dassel, formerly of Litchfield, died Wednesday, April 22, 2020, at his home. A memorial service will be held on Friday, October 22, 2021, at 11:00 a.m. at the Zion Lutheran Church in Litchfield. The Interment... View Obituary & Service Information

The family of Darrel Ernest Nyman created this Life Tributes page to make it easy to share your memories.

Send flowers to the Nyman family.