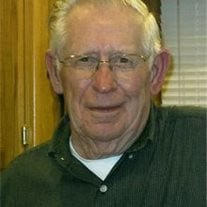 Clarence LeRoy Nelson, age 80, of St. Cloud, formerly of the Cokato area, died Friday, August 10, 2012, at the VA Medical Center in Saint Cloud. A funeral service will be held on Wednesday, August 15, 2012, at 10:30 a.m. at the Bethlehem Lutheran Church in Saint Cloud with the Rev. Dee Pederson officiating. The interment will be held at the Minnesota State Veterans Cemetery – Camp Ripley, Little Falls, Minnesota. A visitation will be held one hour prior to the service on Wednesday at the Bethlehem Lutheran Church in Saint Cloud. The Johnson Funeral Home in Dassel is in charge of arrangements. Clarence LeRoy Nelson, the son of Nels and Florence (Kath) Nelson, was born on September 21, 1931, in Minneapolis, Minnesota. As a young child his family moved to the Red River Valley and lived near Tenney, Minnesota. He grew up and attended country school for his education and later attended the Dunwoody Institute in Minneapolis for a few years. He was baptized and confirmed in the Christian faith and was presently attending the Bethlehem Lutheran Church in Saint Cloud. On February 28, 1952, Clarence was inducted into the United States Army serving his country during the Korean Conflict and was discharged in 1954. He was employed by Onan Corporation in Fridley, where he tested prototypes of new products. On January 16, 1971, Clarence was united in marriage to Patricia Jane Smith at the First Baptist Church in Cokato, Minnesota. Together they made their home in Cokato until 1981, when they moved to Plymouth. They then moved to Lake Mary near Winsted and after several year they moved to Clearwater. In 2004, they moved to Saint Cloud, where they have resided since. Clarence enjoyed spending time with his family, was a talented woodworker, and enjoyed refinishing furniture, going to auctions, and watching the Minnesota Twins and Vikings. He enjoyed traveling and they had often jump in their RV and had traveled to Door County, Michigan, Branson, Missouri, and had spent several winters in Texas. He is survived by his wife, Patricia Nelson of St. Cloud, children, Terry (Shelly) Nelson of Plymouth, Cindy (Walter) Hansen of Dassel, step-children, Debbie (Tom) Nelson of Dassel, Laurie Larson of Fridley, Julie (Bill) Hill of Flaxton, North Dakota, nine grandchildren, eight great grandchildren, sisters, Lois (Gale) Fjelde of Rosemount, Carol Nelson of Dassel, and Janice (Gerald) Bapp of Dassel. He was preceded in death by his grandson, Kevin Hansen, parents, and two brothers, Vernon and Robert Nelson.

Clarence LeRoy Nelson, age 80, of St. Cloud, formerly of the Cokato area, died Friday, August 10, 2012, at the VA Medical Center in Saint Cloud. A funeral service will be held on Wednesday, August 15, 2012, at 10:30 a.m. at the Bethlehem Lutheran... View Obituary & Service Information

The family of Clarence LeRoy Nelson created this Life Tributes page to make it easy to share your memories.