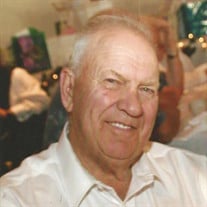 Charles Roger Smith, age 85, of Hutchinson, Minnesota, died Thursday, September 5, 2019, at the Birchwood House Assisted Living in Hutchinson. A funeral service will be held on Tuesday, September 10, 2019, at 11:00 a.m. at Grace Lutheran Church in Hutchinson with Rev. Greg Tobison officiating. The interment will be held at the Ellsworth Cemetery, rural Darwin, Minnesota. There will be a visitation on Monday evening from 5:00 p.m. to 7:00 p.m. at the Johnson Funeral Home in Dassel and one hour prior to the service at the Grace Lutheran Church in Hutchinson. Charles Roger Smith was born on February 19, 1934, in Dexter, Minnesota. He resided in Southern Minnesota before he was moved to the twin cities. Charles attended school in Minneapolis and Litchfield. He came to live with Donald and Esther (Schumann) Smith and was adopted by them in 1947. He was baptized on June 15, 1947, at the home of Don and Esther Smith and confirmed on June 22, 1947, at St. Paul’s Lutheran Church in Litchfield. He was presently a member of St. Peter’s Evangelical Lutheran Church in rural Darwin. He had served his church as an Elder, member of the St. Peter’s Evangelical Lutheran Church Board, President of the Church Board, and served as the maintenance man for several years. On March 12, 1955, Charles was united in marriage to Beverly Barrick at St. Peter’s Evangelical Lutheran Church of Darwin. Together they made their home north of Hutchinson on a farm in Ellsworth Township where he raised crops and milked a dairy herd until 1966. In 1966, Charles switched from milking dairy cows to raising hogs until 1976. Together they celebrated 64 years of marriage. Charles and Beverly enjoyed traveling with family and friends. He was past president of AAL #3103 and a member of Happy Ramblers Good Sam Camping Club. Together they had traveled to Texas, Hawaii, Alaska, California, Norway, Sweden, and Denmark. They spent many winters in Arizona enjoying the sunshine. He was an avid deer hunter and enjoyed spending time on the lake fishing both in the summer and the winter. He loved his family with his whole heart and his wife, children, grandchildren, and great grandchildren brought joy to his heart. He is survived by his wife, Beverly Smith of Hutchinson, children, Steven (Debbie) Smith of Darwin, Kimberly (Dennis) Jones of Litchfield, Stacey (Joshua) Overson of Grove City, nine grandchildren, Jackie ( Brad) Bengson, Stephanie (Brandon) Cox, Ashley (Dave) Covell, Andrew (Amy) Smith, Sarah (Kris) Zemek, Emalee Smith, Tony (Kate) Smith, Mason Overson, and Cooper Overson and many great grandchildren. He is also survived by his sister, Betty (Leslie) Ruskamp of Hutchinson. He was preceded in death by his son, Kenneth Charles Smith, parents, Donald and Esther Smith and a brother, Paul Rogers.

The family of Charles Roger Smith created this Life Tributes page to make it easy to share your memories.

Send flowers to the Smith family.