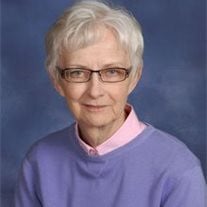 Carol Lou Servin, age 75, of Dassel, died Sunday, April 15, 2018, at the Cokato Manor. A memorial service will be held at 5:00 p.m. on Tuesday, April 24, 2018, at the Gethsemane Lutheran Church in Dassel with the Rev. Laurie O'Shea officiating. The interment will be held on a later date at the Dassel Community Cemetery. There will be a one-hour visitation prior to the service on Tuesday at the Gethsemane Lutheran Church in Dassel. The Johnson Funeral Home in Dassel is in charge of the funeral arrangements. Donations are preferred to be given to Discover Dassel, Co. Dassel History Center, 901 1st Street N, PO Box D, Dassel, MN 55325 Carol Lou (Anderson) Servin, the daughter of Andrew and Louella Anderson, was born on December 07, 1942, in Litchfield, Minnesota. Carol graduated in 1960, from Litchfield High School. She then continued her education by attending beauty school in Minneapolis. She was baptized and confirmed at Trinity Episcopal Church in Litchfield and was a member of Gethsemane Lutheran Church in Dassel, at the time of her death. On April 16, 1966, Carol was united in marriage to Ronald Anton Servin. Together they made their home west of Dassel for several years before they built a home north of Dassel. Carol worked as a beautician for numerous years. She had owned and operated Carol's Beauty Shop. She volunteered at Gethsemane Lutheran Church and was active in many groups. She helped organize the Dassel Red Rooster Days activities. She loved gardening, playing cards, bowling and golfing. She was co-chair of the Lakeside Enhancement Group. She was the treasure for the Dassel township. Carol is survived by her son, Tim (Kristen) Servin of Dassel, step-son, Kurt (Roberta) Servin of Hutchinson, two grandchildren, Kevin (Annie) Servin and Kari (Adam) Thole, siblings, Jerry Anderson, Eugene (Angela) Anderson, Jo Ann (Paul) Foley, Bev (Gary) Finken and Ron Anderson. She is preceded in death by her husband, Ronald Servin parents, Andrew and Louella Anderson, brother, Robert.

Carol Lou Servin, age 75, of Dassel, died Sunday, April 15, 2018, at the Cokato Manor. A memorial service will be held at 5:00 p.m. on Tuesday, April 24, 2018, at the Gethsemane Lutheran Church in Dassel with the Rev. Laurie O'Shea officiating.... View Obituary & Service Information

The family of Carol Lou Servin created this Life Tributes page to make it easy to share your memories.

Send flowers to the Servin family.