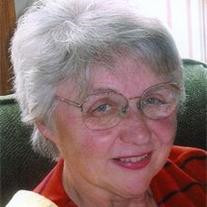 Carol Ann Compton, age 69, of Cokato, formerly of Eden Prairie, died Saturday, October 06, 2012, at the Cokato Manor. A funeral service will be held at 11:00 a.m. on Tuesday, October 9th, 2012, at the Gethsemane Lutheran Church in Dassel with the interment held at the Dassel Community Cemetery following the service. A visitation will be held one hour prior to the service at the Gethsemane Lutheran Church in Dassel on Tuesday. The Johnson Funeral Home in Dassel is in Charge of the funeral arrangements. Carol Ann Compton was born March 10, 1943 to Edward and Mavis (Norine) Compton in Litchfield, MN. She was baptized and confirmed at Gethsemane Lutheran Church in Dassel, MN. She graduated from Dassel High School (DHS) in 1961. After graduation Carol worked for Haapala Seeds in Dassel, First Evangelical Lutheran Church in Litchfield, a travel agency in Willmar and Control Data in Bloomington, where she spent the majority of her working career. Carol was an extremely dedicated, hard working and faithful employee. Carol lived in Eden Prairie from 1983 to 2006 at which time she was diagnosed with Alzheimer's Disease. After her diagnosis she lived for a short time at assisted living facilities in Minneapolis and Hutchinson. When a greater degree of care was needed she was moved to Heritage Place and then the Cokato Manor. Her hobbies included sewing, doing crafts and listening to music. Walking outside, and enjoying the sights and sounds of nature, was another favorite pastime of Carols. She also loved spending time with her nieces, aunts and friends, especially fellow DHS classmates. Carol is survived by her two brothers and their spouses, Dennis (Colleen) of Dassel, Kevin (Carolyn) of Darwin, her three nieces Amanda (Benjamin) Lohmann of Montrose, Kelli (Nick) Benner of Darwin and Stephanie (Yvan) Houareau of Cottage Grove and her nephew Devin Compton of Dassel. Her great nieces and nephews – Theodore, Zachary and Abigail Lohmann, Johannah Benner and Luka Houareau also survive her, as well as several aunts, uncles and cousins. Carol was preceded in death by her parents, Edward and Mavis Compton.

Carol Ann Compton, age 69, of Cokato, formerly of Eden Prairie, died Saturday, October 06, 2012, at the Cokato Manor. A funeral service will be held at 11:00 a.m. on Tuesday, October 9th, 2012, at the Gethsemane Lutheran Church in Dassel with... View Obituary & Service Information

The family of Carol Compton created this Life Tributes page to make it easy to share your memories.

Send flowers to the Compton family.