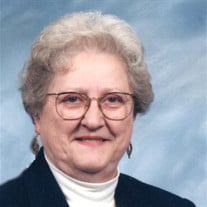 Blanche Elsie “Tudy” Pankake, age 92, of Dassel, died Tuesday, September 3, 2019, at the Augustana Lakeside Healthcare Center in Dassel. A memorial service will be held at 11:00 a.m. on Monday, September 9, 2019, at the Gethsemane Lutheran Church in Dassel with the Rev. Laurie O’Shea officiating. The interment of the urn will be held at the Dassel Cemetery. There will be a one-hour time to gather prior to the service at the Gethsemane Lutheran Church in Dassel on Monday. The Johnson Funeral Home in Dassel is in charge of the memorial arrangements. Blanche Elsie “Tudy” Pankake, the daughter of Henry and Elva (Nelson) Anderson was born on August 20, 1927, in Dassel Township, Meeker County, Minnesota. Tudy was baptized and confirmed at the Evangelical Covenant Church. In 1948, she joined the First Lutheran Church in Dassel where she was a member for the rest of her life. She had been active in WELCA and the Altar Guild. Tudy went to district schooling at the Little Swan Lake School and graduated from Dassel High School in 1945. Tudy attended the De Guilis Beauty College in Minneapolis in 1946. She was then employed in Minneapolis until her marriage to Alan Pankake on August 21, 1948, at the First Lutheran Church (Gethsemane Lutheran) in Dassel. Together they made their home in Dassel where they raised their three children. She was employed at the University of Minnesota Hospital in Minneapolis. She had also been employed at Ernhart Meats and Stelten Meat Market and as a secretary at Weather Master Seeds and Payco Seed in Dassel. Tudy did volunteer work in the community, especially the Lakeside Health Care Center during the years Alan was a resident. Tudy was chosen “Volunteer of the Year” in 2002. She loved to entertain her family and friends, tend to her flowers and yard. She enjoyed knitting, playing golf, and playing cards with her pals. Tudy loved to spend time with her family for holidays and special events. She enjoyed Christmas and would always make lutefisk, potato sausage, and lefsa. She is survived by her children, Reed (Cindy) Pankake of Dassel, Steven (JoAnn) Pankake of Dassel, Pam Rodebush of Santa Rosa, California. Six grandchildren, Josh Pankake, Ali Pankake, Travis (Rhiannon) Pankake, Danielle Johnson, Justin Rodebush, and Chelsea Rodebush and six great grandchildren, Ayva Pankake, Lola Pankake, Ysabela Pankake, Will Pankake, Avery Johnson, and Gracie Johnson. She is also survived by numerous nieces, nephews, and other relatives. She was preceded in death by her husband, Alan, and her parents, Henry and Elva Anderson.

The family of Blanche Elsie (Tudy) Pankake created this Life Tributes page to make it easy to share your memories.

Send flowers to the Pankake family.