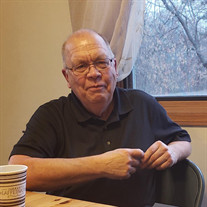 Blair Frederick Halonen, age 67, of Cokato, passed away peacefully on July 6th, 2019 surrounded by his family. He was diagnosed with ALS in June of 2019 and passed away due to a stroke. Visitation was held at the Johnson Funeral Home in Dassel on Thursday, July 11 from 4-7 p.m. Funeral services will take place on Friday, July 12 at 11 a.m. at the First Apostolic Lutheran Church of Dassel, with visitation one hour prior to the service. Interment will be at the Cokato Finnish Cemetery. Blair was born January 12, 1952 in Wadena, Minnesota, the son of Fred and Thelma (Haataja) Halonen. He grew up on a farm north of Cokato and had many happy memories there. He graduated from Cokato High School in 1970 and later attended Dunwoody College of Technology. Blair married Kristin Erickson on February 5th, 1972. They made their home in Cokato, were married for 47 years and blessed with eight children. Blair retired in 2017 as Chief Executive Officer of B & P Drywall and Construction. He always cared for his employees and their families. He liked to explore and pursue his own ideas. He enjoyed gardening, high school wrestling, and trapping. Especially dear were family vacations and summertime swims at Lake Sylvia. He also loved a good visit over a cup of coffee. Blair was a lifelong member of the First Apostolic Lutheran Church; he lived his faith throughout his life. He had a kind and generous heart and his legacy is his loving family. Blair is survived and will be deeply missed by his wife Kristin; children: Mike (Christie) Halonen, Sarah (Larry) Tormanen, Beth (Mike) Davison, Paul (Heather) Halonen, Dave (Morgan) Halonen, Jeff (Tami) Halonen, Annie Halonen and Heidi Halonen; and 29 grandchildren: Tom (Alexandra), Brooke, Juliana, Larissa and Lauren Halonen, Ryan, Kate, Jenna, Nick, Eli, Todd, Abby, Ethan, Julia and Lila Tormanen, Eric, Jimmy, Daniel, Emily, Johnny and Max Davison, Noah, Evan and Toby Halonen, Oscar, Laina and Harman Halonen, Stanley and Bill Halonen. He is also survived by his parents Fred and Thelma Halonen; siblings: Pete (Debbie) Halonen, John (Becky) Halonen, Tyyni (Duane) Salmen, Thea Corbin, Gregg (Suzanne) Halonen, Julie Impola, Tamara (Jeff) Pietila, Teresa (Ken) Johnson, Anna (Dave) Aho, Avis (Eric) Sheffer, Scott (Kathleen) Halonen; sisters-in-law Karen Erickson (David Korte), Sandy (Bob) Hanson, brother-in-law Kurt Erickson and many nieces and nephews. He was preceded in death by his brothers Anthony Halonen and Brent Halonen, his father-in-law Gustav Erickson and mother-in-law Helen Erickson.

Blair Frederick Halonen, age 67, of Cokato, passed away peacefully on July 6th, 2019 surrounded by his family. He was diagnosed with ALS in June of 2019 and passed away due to a stroke. Visitation was held at the Johnson Funeral Home in Dassel... View Obituary & Service Information

The family of Blair Frederick Halonen created this Life Tributes page to make it easy to share your memories.

Send flowers to the Halonen family.