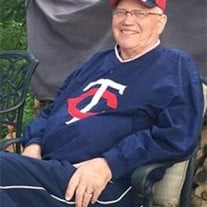 Adrian William "Bill" Carlen, age 77, of Cokato, died, Tuesday, March 27, 2018, at Mercy Hospital in Coon Rapids. A funeral service will be held on Tuesday, April 3, 2018, at 11:00 a.m. at the Evangelical Lutheran Church in Cokato with the Rev. Tim Wheatley officiating. The interment will be held at the Lutheran Cemetery in Cokato. There will be a visitation on Monday, April 2, 2018, from 4:00 pm to 7:00 pm at the Johnson Funeral Home in Dassel. There will be a one-hour visitation prior to the service at the Evangelical Lutheran Church in Cokato on Tuesday. Adrian William "Bill" Carlen, the son of Norman H. and Lila E. (Hess) Carlen, was born on September 14, 1940, in Hutchinson, Minnesota. Bill was baptized at his grandfather Victor Carlen's place and was confirmed at the North Crow Lutheran Church in rural Cokato. They resided in Cosmos for several years before they moved back to the Carlen Homestead. He spent his youth helping on the family farm in Knapp doing the milking and field work. He went to the Knapp Country School before attending the Cokato High School and graduated in 1958. He then furthered his education by attending the Minneapolis Business School. On August 26, 1961, Bill was united in marriage to Darlene "Bunny" Hartneck at Knapp Church in rural Cokato. They have celebrated 56 years of marriage. They raised their three children and enjoyed spending time with his grandchildren. Together they made their home in Cokato where he was employed for 43 years at General Office Products in Minneapolis. He had also owned and operated Bill's Upholstery. He took so much pride in every piece of furniture that he upholstered. He was a member of the Cokato JC's, the Cokato Volunteer Fire Department, bowling league, Cokato Softball Club, coached softball for several years and enjoyed basketball. He loved being a grandfather and enjoyed watching his grandchildren sporting events. Bill loved all sports, he knew when any game was on and he had to be home whenever the game started. He especially enjoyed the Minnesota Twins. He loved to go on cruises and traveling with family, along with spending time up at Pam and Pat's cabin and quality time with his family by his side. He was close with his siblings and enjoyed time together for holidays and the annual Carlen Bocce Ball Tournament. He enjoyed the times that Pastor Tim would come and visit and give him communion. He is survived by his wife Bunny Carlen of Cokato, daughters, Michelle (Craig) Heidenreich of Apple Valley, Connie (Jay) Lindquist of St. Michael, and Suzanne (Darin) Young of Dassel, five grandchildren, Kyle Heidenreich, Michael Lindquist, Jennifer Lindquist, Blake Braunworth, and Dylan Braunworth. He is also survived by his siblings, Harlund (Mary) Carlen of Dassel, Marcye (David) Johnson of Dassel, Shirley (Gary) Peterson, of Cokato, Dennis (Mary) Carlen of Woodbury, and James (Linda) Carlen of Buffalo, along with numerous nieces, nephews and other relatives. He was preceded in death by his mother and father, Norman and Lila Carlen.

The family of Bill Carlen created this Life Tributes page to make it easy to share your memories.