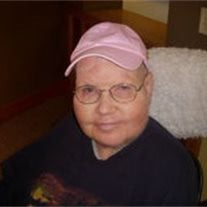 Betty Ann (Berglund) Thorkelson, age 62, of Cokato, died Saturday, July 19, 2014, at the Cokato Manor. A funeral service will be held on Saturday, August 2, 2014, at 2:00 p.m. at the Evangelical Covenant Church in Dassel with the Rev. Keith Carlson officiating. A private interment will be held at a later date. A time to gather with family and friends will be held one hour prior to the service at the Evangelical Covenant Church, in Dassel, on Saturday, August 2, 2014. Betty Ann (Berglund) Thorkelson, the daughter of Robert and Dorothy (Soine) Berglund, was born on September 29, 1951, at the Rice Memorial Hospital in Willmar. She was baptized as an infant at the Zion-Irving Lutheran Church in rural Paynesville, Minnesota, and later was confirmed in 1965, at the First Lutheran Church in Dassel. Betty graduated from Dassel High School in 1969. After high school, Betty moved to Portland, Oregon to begin her life and see the sights. She resided in Portland until 1977 when she moved back to Dassel, Minnesota. In August of 1977, Betty was united in marriage to Brian Thorkelson, at the Evangelical Covenant Church in Dassel. Together they made their home in Cokato, where Betty had been employed for over 20 years at National Connectors / Ablecon and had also worked for a short time as a housekeeper at the Cokato Manor. Betty had to overcome many obstacle's in her life due to her brain tumor, but did not let the tumor slow her down. She enjoyed her many cats that she had over the years, all by the name of "Betsy". She loved the outdoors, her flower garden, antique shopping, quilting, fishing, making watermelon pickles, and especially enjoyed spending time with her family for holidays and parties. She could always make her family laugh with a look or a short quip. She is survived by her siblings, Diana (Dellas) Norgren of South Haven, Dennis (Carol) Berglund of Dassel, Sandra (John) Crayford of Dassel, Judy (Clarence) Schmitz of Dassel, and Dale (Ivonne) Peterson of Dassel. She is also survived by several nieces, nephews and other relatives. She was preceded in death by her husband, Brian in 1999, her father, Robert Berglund, her mother and step-father, Dorothy and Merle Peterson, nieces, Julie Schmitz and Jessica Peterson.

Betty Ann (Berglund) Thorkelson, age 62, of Cokato, died Saturday, July 19, 2014, at the Cokato Manor. A funeral service will be held on Saturday, August 2, 2014, at 2:00 p.m. at the Evangelical Covenant Church in Dassel with the Rev. Keith... View Obituary & Service Information

The family of Betty Ann Thorkelson created this Life Tributes page to make it easy to share your memories.

Send flowers to the Thorkelson family.