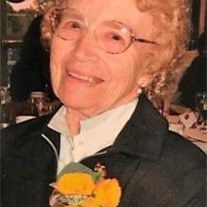 Betty Irene (Compton) Johnson, age 91, of Litchfield, died Wednesday, January 10, 2018, at the Meeker Manor in Litchfield. A funeral service will be held on Monday morning at 11:00 a.m. at the Kimball Church of Christ with the Rev. Kevin White officiating. The interment will be held following the service at the Dassel Community Cemetery. There will be a visitation on Sunday evening from 4:00 p.m. to 8:00 p.m. and one hour prior to the service on Monday at the Kimball Church of Christ. Betty Irene (Compton) Johnson, the daughter of Edmund and Esther (Russell) Compton, was born on August 17, 1926, in Dassel, Minnesota. She grew up in Dassel where she attended school and was baptized and confirmed in the Christian faith. On August 15, 1942, Betty was united in marriage to Richard A. Johnson in Lebanon, Missouri. Together they made their home in Hutchinson. In 1948, they moved to a farm in Kimball, where she resided until 2012. For the past five years, Betty has been in the care of others. For 25 years, Betty was employed by Fingerhut in Annandale and later Saint Cloud. She was a 50-year member of the Kimball American Legion Auxiliary and had been an active member of the Kimball Church of Christ Ladies Aid. She loved her family dearly and was actively supportive in the care of her grandchildren. She was a great baker and made many treats for her grandchildren and great grandchildren. She enjoyed spending time outside in her garden planting and taking care of her flowers, and was a talented seamstress, and embroider. Betty and Richard loved to travel in their motorhome and had taken many trips around the country and had even traveled twice to Alaska. She is survived by her daughters, Sherry Schliesing of Howard Lake, Janice (Rick) Schutz of Cold Spring, Jackie (Paul) Ruhland of Minnetonka, Betty Lee Johnson of Grove City, and Wanda (Steve) Olk of Montrose, eleven grandchildren, three step grandchildren, 31 great grandchildren, and one great great grandchild, sister, Esther Klima of Cokato, brother-in-law, Lowell Gillman of Cokato, and sisters-in-law, Judy Compton of Burnsville and Lotta Compton of Oklahoma. She is also survived by numerous nieces and nephews and other relatives. She was preceded in death by her husband, Richard, three children, Karen Johnson, Stevie Johnson, and Mike Johnson, parents, Edmund and Esther Compton, siblings, Alice Compton, Edward Compton, Mildred Carlen, Hazel Dallmann, Wally Compton, Robert Compton, and Sadie Gillman.

Betty Irene (Compton) Johnson, age 91, of Litchfield, died Wednesday, January 10, 2018, at the Meeker Manor in Litchfield. A funeral service will be held on Monday morning at 11:00 a.m. at the Kimball Church of Christ with the Rev. Kevin White... View Obituary & Service Information

The family of Betty Irene Johnson created this Life Tributes page to make it easy to share your memories.