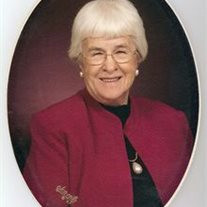 Betty Lois Johnson, age 92, of Dassel, died Tuesday, February 28, 2017, at the Augustana Lakeside Health Care Center of Dassel. A memorial service will be held on Monday, March 13, 2017, at 2:00 p.m. at the Gethsemane Lutheran Church in Dassel with the Rev. Daniel Belgum-Blad officiating. The interment of the urn will be held at the Dassel Community Cemetery in the spring. There will be a time to gather on Sunday evening, March 12, 2017, from 4:00 p.m. – 7:00 p.m. at the Johnson Funeral Home in Dassel. There will be a time to gather one hour prior to the service on Monday, March 13, 2017, at the Gethsemane Lutheran Church in Dassel. Betty Lois (Olmstead) Johnson, the daughter of James A. and Flora Montgomery Olmstead, was born on January 3, 1925, in Ellsworth Township, Meeker County, Minnesota. She grew up in the Dassel area where she was baptized and confirmed at the Church of Christ. Betty attended country school before she moved as a teenager to St. Cloud where she attended and graduated from Saint Cloud Tech. On February 14, 1948, Betty was united in marriage to Glenn Donald Johnson at the Church of Christ in Dassel. Together they made their home for a short time period in South Dakota and Texas where Glen worked construction before moving back to Dassel. Betty had been employed at Dayton's, 3-M, Green Giant in Cokato, was a secretary at Midwest Hatchery and Storm Systems in Dassel. She had also been employed at the Humming Bird Habitat as well as the Dassel Lakeside Nursing Home in the office. Betty loved her family and enjoyed holidays and the times she spent with her children, grandchildren, and great grandchildren. Her grandchildren will always remember her great sense of humor and her love for cats. She was a wonderful cook and was a talented baker, making great rolls, rye bread, and rice pudding that she lovingly gave to family and friends. She was a master gardener and always had a wonderful garden that exploded with color during the summer months. She was a member of a photography club, a birthday club, and also served in the Ruth Circle of the Gethsemane Lutheran Church WELCA as well as serving on the church council. Betty is survived by her children, Glenn "Chuck" (Laurie) Johnson of Litchfield, Diane (Dennis) Johnson of Litchfield, Galen (Karen) Johnson of Fairbanks, Alaska, and Rev. Gary (Diane) Johnson of Red Lake Falls, 12 grandchildren, and 17 great grandchildren. She is also survived by brother-in-law Bob Shirley, sister-in-law Shirley Ostlund, several nieces, nephews, and other relatives. Betty was preceded in death by her husband, Glenn, a great grandson, Zachary Mlodzik, her parents, and three sisters, Ethel Zepplin, May Olmstead, and Kathy Shirley.

Betty Lois Johnson, age 92, of Dassel, died Tuesday, February 28, 2017, at the Augustana Lakeside Health Care Center of Dassel. A memorial service will be held on Monday, March 13, 2017, at 2:00 p.m. at the Gethsemane Lutheran Church in Dassel... View Obituary & Service Information

The family of Betty Lois Johnson created this Life Tributes page to make it easy to share your memories.