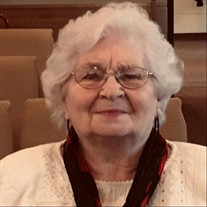 Betty Maureen Bobrowske, age 89, of Cokato, died Wednesday, March 4, 2020, at the St. Cloud Hospital. A memorial service will be held on Tuesday, March 10, 2020, at 11:00 a.m. at the Elim Mission Church in Cokato. There will be an interment of the urn held in the spring at the Dassel Community Cemetery. There will be a time to gather with the family one-hour prior to the service on Tuesday, March 10, 2020, at the Elim Mission Church in Cokato. The Johnson Funeral Home in Dassel is in charge of the memorial arrangements. Betty Maureen Bobrowske was born September 3, 1932, to Ivan and Clara Johnson at Dassel, Minnesota. She grew up north of Dassel; attended school at Maynard Lake until 8th grade and graduated from Dassel High School in 1950. She went to Minneapolis after graduation to work as a secretary. She returned to Dassel after working there for a year. She was baptized in Kingston, was confirmed and married at the Covenant Church in Dassel. She was blessed with six children from the marriage. She farmed for many years; then worked as a Federal Meat Inspector and later as a clerk at Family Rexall Drug in Hutchinson for 11 years before retiring. She was a member of the Covenant Church in Dassel for most of her life. She became a member of Elim Mission church when she moved to Edgewood Gables in Cokato. At this time, we would like to thank her caregivers there. She was a member of the Kiwanis Club and volunteered with the Red Cross blood mobile for 6 years. She was in a craft club for many years and really enjoyed her red hats group. Betty spent many years sewing clothing for her children and her grandchildren, as well as color guard uniforms and bridesmaids dresses. She also volunteered for the sewing group at church making bandages for those overseas. She stitched beautiful needlework projects, was an avid reader and enjoyed her crossword and jigsaw puzzles. Betty enjoyed traveling before her retirement and had visited Canada, Mexico, Hawaii, Norway, Sweden, Denmark, Finland, Germany, Poland, Estonia, Egypt, Kenya, Tanzania and Russia. Betty was very proud of her family’s longevity. She was in five generation photographs for three consecutive generations. Betty will be dearly missed by daughters Lois (Wayne) Koehnen of Dassel, Leslie (Mike) Fitzgerald of Sylmar, California, Lisa (Bruce) Hendrickson of Cokato, and Lana (Joe) Kopecky of Sandy, Utah, as well as son Lee Bobrowske of Dassel. She was known by everyone as “Betty B” and called herself an “L” raiser. She is further survived by sisters Bonnie (Jerome) Betker and Margie Piepenburg, 10 grandchildren, 10 great grandchildren, and two great-great grandchildren. She was preceded in death by her parents, Ivan and Clara Johnson, and her special daughter, LaRae Lynn, at the age of 5.

Betty Maureen Bobrowske, age 89, of Cokato, died Wednesday, March 4, 2020, at the St. Cloud Hospital. A memorial service will be held on Tuesday, March 10, 2020, at 11:00 a.m. at the Elim Mission Church in Cokato. There will be an interment... View Obituary & Service Information

The family of Betty Maureen Bobrowske created this Life Tributes page to make it easy to share your memories.

Send flowers to the Bobrowske family.