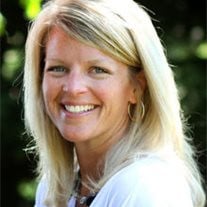 Beth Ann (Remme) Flick, age 47, of Dassel, died peacefully in her home on Wednesday, October 11, 2017, after a year-long battle with cancer. A memorial service will be held at 11:00 a.m. on Thursday, October 19, 2017, in the Performing Arts Center at the Dassel-Cokato High School. There will be a time to gather with the family on Wednesday evening, October 18, 2017, from 4:00 p.m. to 7:00 p.m. at Gethsemane Lutheran Church in Dassel. Johnson Funeral Home of Dassel is in charge of the funeral arrangements. In lieu of flowers memorials are preferred for a future legacy. Beth, the daughter of Harold and Maxine (Helling) Remme, was born on May 11, 1970, in Winona, Minnesota. Beth lived in Winona until 1979, when her family moved to the Trimont area. In 1981, the family moved to Tracy. Beth graduated from the Tracy Area High School in 1988. She received her Bachelor's Degree in Education from the University of Minnesota, Morris in 1992 and her Master's Degree in Gifted and Talented Education from the University of St. Thomas in 2015. Beth was baptized in May of 1970 at Central Lutheran Church in Winona and confirmed at Tracy Lutheran Church in 1984. She was currently a member of Gethsemane Lutheran Church in Dassel where she was active as a pianist and a member of the contemporary adult worship band "New Day." Beth served as a member of the Youth Board and helped to schedule servers for meals on confirmation nights. Beth began her teaching career in 1992 at Dassel-Cokato Middle School where she taught sixth grade. Beth was involved in numerous school committees, including the Mentor Program, where she took great joy in mentoring new teachers. Beth was a recipient of the Leadership in Educational Excellence Award. For 25 seasons, Beth was a part of the Charger volleyball program including a successful tenure as Head Coach, where she earned the DC Coach of the Year Award. For nearly 17 years, Beth was the manager of the Cokato City Pool. Beth would instruct lifeguard training, swimming lessons, and recruit her volleyball players to be her lifeguards and assistant managers. She loved teaching and coaching, and was a role model to many teachers, coaches, and students. On December 15, 2007, Beth was united in marriage to Cole Christian Flick at Evangelical Lutheran Church in Cokato. Together they made their home in Dassel to raise their family. Beth loved music, spending time reading on the pontoon on Long Lake, going for walks alone or with her family, attending her children's many activities and sporting events and getting together with friends and family. Beth gave of herself to her family, friends, her students, and to everyone that had the privilege to know her. She will be deeply missed by her family, her many friends, and the Dassel-Cokato community. Beth is survived by her husband, Cole Flick, of Dassel; children, Jordan and Amber (Wagman) Flick of St. Michael, Cy, Gus, and Jacob Flick, all of Dassel; parents, Harold and Maxine Remme, of New Ulm; siblings, Bruce (Carie) Remme of Marshall, and Brian (Kim) Remme of Hastings. She was preceded in death by her paternal and maternal grandparents.

The family of Beth Ann (Remme) Flick created this Life Tributes page to make it easy to share your memories.