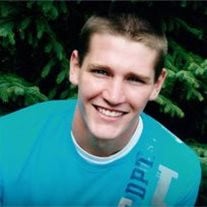 Austin Robert Carlen, age 20, of Cokato, formerly of Dassel, died, Monday, May 20, 2013, in the Richmond Area. A Mass of Christian Burial will be held on Saturday, May 25, 2013, at 11:00 a.m. at St. Philips Catholic Church in Litchfield with Father Joe Steinbeisser officiating. The interment will be held at the St. Ignatus Catholic Cemetery in Annandale following the service. A visitation will be held on Friday evening from 5:00 p.m. to 8:00 p.m. at the Johnson Funeral Home in Dassel. There will be a one hour visitation prior to the service on Saturday at the church. Austin Robert Carlen, the son of Kevin and Nicole (Kelly) Carlen was born on March 14, 1993, in Litchfield, Minnesota. He grew up in Dassel and graduated from the Dassel Cokato High School in 2011. Austin was a member at St. John's Catholic Church in Darwin where he was both baptized and confirmed. Austin was an avid outdoorsman who enjoyed hunting, and snowmobiling. He could often be found on a tractor helping his grandfather on the farm. He was a member of the Cokato Kings baseball team for the past few years. Austin was a past member of the DC Charger football team, basketball team, and a catcher on the baseball team. While in high school Austin started his own lawn mowing and snow removal business and recently purchased a landscaping company. He also had worked for Hector Farms, helping with the spring and fall field work. He was doing well and enjoyed being his own boss and helping others. One of his greatest joys was working with the land, be it in a tractor or on a lawn mower working to create the perfect stripe pattern on a lawn. Austin had a generous heart that overflowed with love for his family and friends. A phone call was all it took and he would stop everything to help. From his almost daily phone calls to mom and dad just "seeing what's up" to stopping at his younger cousins home to play, and stopping at the farm to check in, he was always putting others first. He experienced more in his 20 years than some do in a lifetime. He is loved and will be eternally missed by his parents, Kevin and Nicole Carlen of Dassel, sisters, Lexi Carlen, Anna Carlen, Alyssa "Bisser" Carlen all of Dassel, and his brother of the heart, Brady Stamer, paternal grandparents, Harlund and Mary Carlen of Dassel, maternal grandparents, Tim and Robin Kelly of Dassel, great grandparents, Dennis and Marlys Ortquist of Cokato, and numerous aunts, uncles, cousins and other relatives and friends. He was preceded in death by his great grandparents, Robert & Beverly Kelly, Norman & Lila Carlen, great great grandmother, Helen Salmela, great great grandmother, Doris Kelly, and great great grandfather, Claude Gillman.

The family of Austin Carlen created this Life Tributes page to make it easy to share your memories.